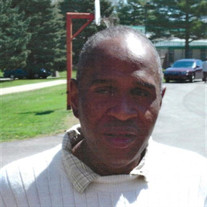 Joe L. Simpson was born on May 4, 1957 in the town of Trenton, Tennessee to Florence Robinson and George Howard Simpson, Sr., both of whom preceded him in death. Gertrude Simpson Dumas (Robert Dumas), his aunt/mother, preceded him in death August 2018. On Monday, May, 6 2019 at approximately 11:49 p.m., Joe entered the heavenly gates of his new home with streets paved of gold. Upon the death of his mother, Florence, Joe’s father took him and his two brothers to his sister, Gertrude Simpson. She immediately accepted the role of aunt and mother. The home would consist of the boys and Gertrude’s niece, Anita. Years went by and Gertrude decided to move the family to Mayfield, KY. At the age of 20 years old, Joe’s condition required him to go to the Western State Hospital in Hopkinsville, KY. As time passed, Joe was in and out of several special needs facilities. Due to the privacy laws, Joe’s whereabouts became a question and the family searched to locate him. After much inquiring, Joe was finally located at a facility in Owensboro, KY. The last three years of his life, he resided at Health At Home, a state residential facility in Owensboro, KY. In Owensboro, Joe made several friends at this new facility. Many of the staff there became very close to Joe and he was admired by them. Joe’s case manager, Solivita Reneger became associated with his family. Anita and Gertrude would contact her from time to time to find out about Joe’s well being. Joe leaves to mourn his death his brother: John Lee Simpson; and his sister: Anita Simpson-England both of Mayfield, KY; sisters: Violet M. Emerson (Bishop Eddie Emerson) of Humbolt, TN, Mary Alice Harris of Trenton, TN; four other brothers: George Howard Simpson (deceased), Toy Jentry (deceased), Billy Ray Elder of Dallas, TX, and Charles Hughes, Jr. of Carbondale, IL.

The family of Joe L. Simpson created this Life Tributes page to make it easy to share your memories.

Send flowers to the Simpson family.