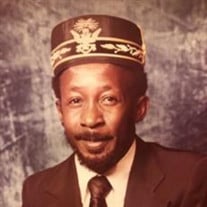 Jesse Clardy, 81, of Newburgh, IN went to be with the Lord surrounded by family on Friday, March 25, 2022, at Deaconess Gateway Hospital. He was born May 22, 1940, in Clarksville, Tennessee, to the late Ruth Clardy and Amos Washington. He was married to Earnell C. Clardy for 42 years He graduated from Lincoln Clark Douglas High School in 1958 and worked for Indiana Bell, AT&T, and Lucent Technologies as a Systems Technologist until his retirement in 2000. He was a lifelong member of Memorial Baptist Church and was instrumental in assisting with the construction of the new facility. Jesse enjoyed traveling, fishing, and he loved his family. He traveled quite extensively Internationally as well across the United States with family and friends, especially with his cousin Martha, the late Jesse and Lois Scruggs, Anna Melcher, and the late Stephen Melcher. Those that knew Jesse, know that he didn’t know the meaning of the word stranger. Though he was short in stature, he was a giant in life with a heart to match. He was affectionately known and called husband, uncle, father, granddad, big cousin, big brother, and friend. Jesse, an upright man, believed in supporting and serving his community. He served loyally for over 50 years with Evansville Lodge #5 where he has garnered the position of Worshipful Master from 1975-1976, St. Johns Consistory #54, and Cawthar Temple #118, Evansville, where he served as the Illustrious Potentate for two consecutive years and as the Treasurer for many years. His desire for knowledge earned him his 33rd degree in 1984. During his lifetime, Jesse received several honorary awards which included Indiana Gala Day Illustrious Potentate of the year (1980) and Indiana Gala Days Imperial Deputy of Oasis of the Year (1987). Jesse is survived by his loving wife of 42 years, Earnell C. Clardy; children: Ray A. Clardy (Francian), Dawna D. Williams (Wilbert), Arthur V. Clardy (Johanne), James E. Williams, Jr.; half-sister: Mattie Washington; 3 brothers-in-law; a sister-in-law; aunt: Catherine Burton; 8 grandchildren; a host of great, great-great grandchildren, nephews, nieces, cousins, and friends

Jesse Clardy, 81, of Newburgh, IN went to be with the Lord surrounded by family on Friday, March 25, 2022, at Deaconess Gateway Hospital. He was born May 22, 1940, in Clarksville, Tennessee, to the late Ruth Clardy and Amos Washington. He... View Obituary & Service Information

The family of Jesse Clardy created this Life Tributes page to make it easy to share your memories.

Jesse Clardy, 81, of Newburgh, IN went to be with the Lord surrounded...

Send flowers to the Clardy family.