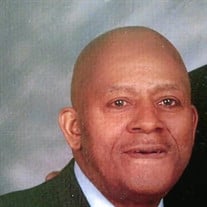 Jerry Oscar Cabell, 76, affectionately called “J.C.” of Henderson, KY, was born on April 16, 1945, in Henderson, KY, and passed away Tuesday, January 4, 2022, at Deaconess Henderson Hospital. J.C. was a veteran of the Air Force Branch of the United States Military and served four years. He was a 1963 graduate of Douglass High School in Henderson, KY, and a graduate of Lane College in Jackson, TN. He was a member of Kappa Alpha Psi Fraternity, Inc. and a devoted employee at Big Rivers Electric Corporation for 27 years. J.C. was a volunteer at the Evansville Rescue Mission, involved in the Henderson Branch of the NAACP, and after retirement worked at Hobby Lobby in Evansville, IN. J.C. was a member of Greater Norris Chapel Baptist Church in Henderson, KY, and attended Sunday School at Norris Chapel and First Missionary Baptist Church in Henderson, KY. J.C. was a loving, kind, patient, and sweet man, who enjoyed life, giving back to his community, and being with his family. He was preceded in death by his biological parents, William Chambers and Bertha L. Barnett Chambers; his adoptive parents, Roger and Claudine Cabell; three sisters, Sharon Chambers, Brenda Thomas, and Tonia Chambers; and two nephews, Robert Chambers and Timothy Chambers. J.C. is survived by his wife of 37 years, Elizabeth Anne Cabell; son, Jarrett (Gina) Cabell; granddaughter, Gia Cabell; brother, William “Chet” Chambers; brother-in-law, William Pointer, Jr.; nieces, Wendy Chambers, Dawn Chambers, Karen Chambers, and Alicia Thomas; nephews, Marvin Chambers, and William Chambers, Jr.; great-nieces, great-nephews, cousins, and countless friends, along with his St. Louis family. A walk thru visitation will be held at Greater Norris Chapel Baptist Church on Saturday, January 22, 2022, from 11:00 AM to 1:00 PM. Social distancing guidelines will be in place. The funeral service is private but can be viewed on the church's Facebook page. In lieu of flowers, donations may be made to the Sunday School ministries of Greater Norris Chapel, Henderson, KY, or First Missionary Baptist Church, Henderson, KY.

The family of Mr. Jerry Oscar Cabell created this Life Tributes page to make it easy to share your memories.

Send flowers to the Cabell family.