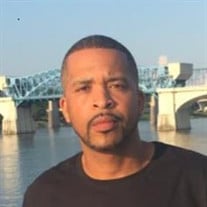 Jeremy Clark White was born August 22, 1970 in Madisonville, KY to the union Jackie White and the former Diana White. Jeremy White left this earth December 6, 2017. He was 47 years old. He received his formal education through the Hopkins County School System, eventually graduating from Madisonville North Hopkins High School in 1989. Jeremy, better known as “Mousey”, accepted Jesus Christ as his Lord and Savior as a teenager. He was baptized at Eastview Missionary Baptist Church. He remained an active member of the church until he attended college. Mousey has ALWAYS had a love for fire trucks. As a child, you could not tell whether an actual fire truck was in the area or if it was Mousey imitating the sound of a fire truck. He also had a love for sports, especially BAMA Time. He was known to have the best jump shot in basketball and the best curve ball in baseball to all that knew him. These two admirations resulted in him enjoying his college life playing sports and dedicating his adult life to the Cromwell Fire Department. Furthermore, Mousey was team leader at Perdue in Beaver Dam, KY. The elderly knew Mousey as a kind-hearted young man that would lend a helping hand at any given moment. However, family and friends knew him to be the comedian, Michael Jackson dance impersonator, and just a good guy. You never heard him bragging about material possessions or worrying about uncontrollable events. Mousey was just a genuine friend who showed love to all people. He was preceded in death by his father: Jackie White; paternal grandparents: Vaxton and Catherine White; maternal grandparents: Vernon and Lillie Mae Fairrow. Mousey leaves to cherish his memory; a loving fiance’: Gricelda Zavala of Beaver Dam, KY; children: Breanna, Jeremy, Siara, and Ricky; parents: John and Diana Holmes of Madisonville, KY; brothers: Jefferey White (Samantha) of Indianapolis, IN, Jonathan White (Anita) of Upper Marlboro, MD, Jonathan Holmes of Madisonville, KY, and Justin Holmes of Louisville, KY; sisters: Jevonne “Cathy” Logan (Marcus) and Jamiera “Christy” Johnson (Cantrell) both of Louisville, KY. Additionally, he leaves a host of aunts, uncles, cousins, friends, and Hopkins/Ohio County community members who loved him dearly.

Jeremy Clark White was born August 22, 1970 in Madisonville, KY to the union Jackie White and the former Diana White. Jeremy White left this earth December 6, 2017. He was 47 years old. He received his formal education through the Hopkins County... View Obituary & Service Information

The family of Jeremy Clark White created this Life Tributes page to make it easy to share your memories.

Send flowers to the White family.