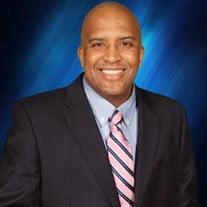 Jeffery C. White, 52, of Indianapolis, IN, went home to be with his Lord and Savior Jesus Christ on June 19, 2021. Jeff was born in Madisonville, KY on March 29, 1969. He attended Madisonville North Hopkins High School, until moving to Murray,... View Obituary & Service Information

The family of Jeffery C. White created this Life Tributes page to make it easy to share your memories.

Send flowers to the White family.