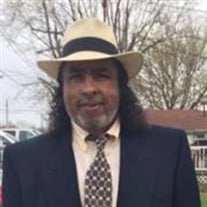 “On the third day of March of 2021, Mr. Jason Armstead, loving father, loved brother, caring uncle, and devoted friend, entered eternal rest at the seasoned age of 56. Born on March 11, 1964, the Honorable Jason was born in Henderson, Kentucky, a twin to his brother Jacob, the last child of Mr. and Mrs. Strother Banks and Jessie Mae Armstead. A 1982 graduate of Henderson County High School, our beloved Jason enlisted into the United States Navy in 1987, performing in one of his most anointed gifts, cooking. While stationed in Charleston, South Carolina, Jason met and wed, Ms. Amber “Amy” Stuckey, on March 11, 1989, and to that union, was born his first daughter, Miss Jessyca Armstead. Nine years later in 1998, he welcomed his youngest daughter, Miss Darkaisha Johnson. A child of the church, our beloved Jason gave his life to Christ at an early age at Sanders Temple Church of God in Christ under his spiritual father, Elder V. L. Sanders. Later in life, he became a member of Love Temple Church of God in Christ under his brother, Pastor Harlan C. Armstead, Sr. Our beloved Jason was proceeded to glory by his parents, Strother Banks and Jessie Mae, his twin brother, Jacob, and eldest brother, Archie, Sr. Our beloved Jason’s legacy will always be cherished through his loving children, daughters: Miss Jessyca Armstead and Miss Darkaisha Johnson; his devoted brothers and sisters: Shirley and Amos Randle, Jesse Armstead of Evansville, Indiana, Dorothy and Richard Morse, Lewis and Patricia Armstead, Pastor Harlan and Sharon Armstead of Henderson, Kentucky, Gloria Anderson of Evansville, Indiana, and Lois Elaine Armstead of Henderson, Kentucky; his uncle: Leonard “Boat” Johnson of Henderson, Kentucky; he is also survived by his sister-in-law: Gloria Davis (Archie Davis, Sr., deceased) of Marion, Indiana and brother-in-law, Charles Anderson, Sr., of Evansville, Indiana; his special and dear friend: Crystal Frasier, who loved and cared for him until his last moments; a host of nieces, nephews, and cousins who all loved him dearly, including his childhood friends, Roland “RoRo” Tyler and Glen Taylor. Our beloved Jason, a great chef to all, never complained, was full of love, and devoted to caring and ensuring that his family and friends were taken care of to the fullest. His friends would tell you he was kind and caring, a gentle soul. His siblings would say he was patient and willing, a humble brother. His daughters will tell you he was loving and proud, a gracious father. Most importantly, God will say he was a good and faithful servant; and for that reason, the life of our beloved Jason is one that will be remembered as one full of love to give and love received.”

The family of Jason Armstead created this Life Tributes page to make it easy to share your memories.

Send flowers to the Armstead family.