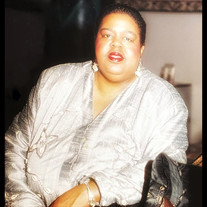 Janet Louise Johnson 72, passed away to her heavenly home on Friday, April 16, 2021, at her daughter's home in Chattanooga, Tn. She was born May 9, 1948, in Evansville, to Betty Carter Reed and Kenneth W. Johnson Sr. Janet was very loving, trustworthy, kind, and hard-working. She had a love for Christ, fashion, sewing, singing, and being creative at a young age. Janet was a graduate of Central High School Class of 1966 and after attending Indiana State University, moved to Chicago, Il where she met and married her love, Jesse Johnson Jr. To that union daughter Dianna was born. During the time she lived in Chicago she was a member of Antioch M.B. Church South. She sang in the choir and worked in the National Baptist Convention. Janet started her career working for Chicago's Public Health Department in the inner-city. Years later, she returned to Evansville where she worked many years at Stepping -Stone as a counselor. She then worked at the Community Action Program of Evansville from which she retired after more than 25 years of service. Janet was an active member of New Hope M.B. Church for over 40 years. During her Christian journey, she served as president of several organizations: the Matrons Auxiliary, the Circle Deborah Mission Group, and the Women's Missionary Union. She was also chairperson of many events such as Vacation Bible School, the Foreign Mission, and the church’s annual picnic. Janet was a counselor to the Senior Red Circle and the Celebrate Recovery Program. She was a member of the Choir, the New Hope Drama Team, was a Women's Day Speaker, and a Southern District Association Women's Department member. Her love to serve was remarkable but being a loving and compassionate mother and grandmother was her greatest joy! Her unconditional love and compassion will be forever in their hearts. Her brothers and "only sister" were very important to Janet along with her special relationship with her Aunt Wanda. Janet’s love didn’t stop with her blood family but was shared with her life-long friends: Lonza, Wilhemina, Shirley, Wilma, Tish, and Colletta, in addition to her sisters in Christ: Pat, Bettye, Alethea, and the remainder of the Circle Deborah who were affectionately known as “The Little Debbies”. Her sister-in-law, Janis Jones (Luther) shared an irreplaceable bond that only God had a hand in, and she was blessed to be adopted into the Young Family as a sister to Wanda, Lonza, Pam, Clarissa, Zsa Gwen, Larry, and Keith. Janet also worked in the community with various organizations. She was a board member of Carver Community Organization and president of the EBONE' 66 Class reunion. She has touched many lives in a positive way and leaves a memorable legacy. Janet is preceded in death by her parents: Betty Reed and Kenneth W. Johnson, Sr.; her grandparents: Frank and Louise Carter, Norman, and Arletta Johnson; aunts: Lilly Anderson, Jessie Kirby, Dorothy Downer, Stella, and Martha; uncles: Norman, Jr. and Benjamin Johnson, Bill, and Doug Carter. Left to cherish her memory and perpetuate her legacy is her daughter: Dianna Johnson Fourte, Chattanooga, TN; grandson: Aubrey Joseph Fourte Jr; bonus sons: Jesse and Emilio; sister: Gina Johnson Farris (Vincent), Chicago, IL; brothers: Jerry Anderson, Ofallon, IL, Rev. Kenneth W Johnson, Jr . (Karen), Swansea, IL, Gregory Johnson, Slidell, LA; loving aunts: Wanda Hines, Emily Starks, Juliette Clardy; uncles: Russell, Richard, and Orlando Johnson; cousins/brothers: Clarence, Leslie, and Ron Kirby, Michael Chatman, Alyce Dulin, Carol Montague; nieces, nephews, cousins, family, and a host of friends.

Janet Louise Johnson 72, passed away to her heavenly home on Friday, April 16, 2021, at her daughter's home in Chattanooga, Tn. She was born May 9, 1948, in Evansville, to Betty Carter Reed and Kenneth W. Johnson Sr. Janet was very loving,... View Obituary & Service Information

The family of Janet Louise Johnson created this Life Tributes page to make it easy to share your memories.

Janet Louise Johnson 72, passed away to her heavenly home on...