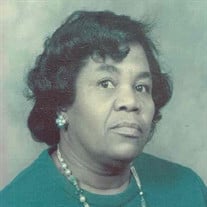 Jamie “Babe” Cheatham Tillerson, age 94, passed away Friday, June 10, 2016 at Signature Healthcare of Newburgh. She was born Monday, October 31, 1921 in Henderson, Kentucky to Rev. James Cheatham and Mattie (Simms) Dixon Cheatham Jones. She received her education in the Henderson Kentucky School System. In 1939, Jamie married Thurman Harvey and to this union, two children were born. A “Rosie the Riveter,” Jamie began working in the dry cleaning industry at the outbreak of World War II. She worked in the industry until her retirement. Jamie began her Christian journey by attending Sunday School at Norris Chapel Baptist Church where her father was an associate minister. After his death, she continued to attend and was baptized at the age of 21. She walked closely with the Lord all of her life and was an excellent student of the Holy Word. Jamie married Clarence Tillerson on May 1, 1948 and to this union, two children were born. She was an avid reader. She enjoyed reading all genres, including World History and American History, but she especially enjoyed family history and was known among all of her loved ones as the “Family Historian.” She is survived by three daughters: Maxine Harvey Daniel of Castro Valley CA, Linda Tillerson Lightfoot of St. Louis MO, and Sheila Tillerson Washington of Evansville IN; two grandsons: Patrick Simpson and Erik Washington who assisted with her care; five granddaughters: ShéHarvey Massinissa, Shayla Simpson, Erin Jamé Washington, Shakira and Shelise Washington; nine great-grandchildren; a niece, Paula Cheatham Edwards of Flint MI; and a host of great-nieces and great-nephews; and special neighbors that made “aging in place” a real possibility: B.Y. Norris, Ken and Tammy McNary and family, and Ella Woolfolk. She was preceded in death by her parents; her husband, Clarence; a son, Ralph Edward Harvey; a daughter, Helen Tillerson Chambers; a granddaughter, Carolyn Chambers; sisters: Ada Dixon Robertson Johnson, Anna Dixon Sheppard, Ellen Dixon, and Josephine Cheatham; brothers: James Dixon, William Dixon, Oscar Cheatham, and Booker T. Cheatham. We will always carry your memory in our hearts as a beloved mother, grandmother, great-grandmother, aunt, neighbor and friend. Services will be held Saturday, June 18, 2016 at 11:00am at Liberty Missionary Baptist Church in Evansville with visitation from 10:00am until service time. Burial in Fernwood Cemetery in Henderson KY.

The family of Jamie "Babe" Tillerson created this Life Tributes page to make it easy to share your memories.

Send flowers to the Tillerson family.