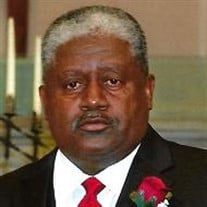 James Stephen (Stevie) Robards was born on May 22, 1950 to the late Ann Hatchett and Joseph Fredrick Robards. Stevie was the first African American to become an Altar Boy at Holy Name Catholic Church in addition to being the first African American to graduate from Holy Name Catholic School where he excelled in basketball and baseball. Upon graduating, he was drafted into the United States Army where he moved up the ranks becoming a Drill Sergeant. Stevie fought in the Vietnam War receiving the Bronze Medal for his service. He was very proud to serve his country and decided to remain dedicated to the military through his enlistment into the Army Reserves. He retired after 22 years of service. After coming home from the war, Stevie attended Lockyear Business College and received his Associate Degree. He later obtained employment at K.B. Alloys where he worked for 27 years as a castor. After retirement, Stevie wanted to become involved in the community so he volunteered in the Henderson County Court System to help troubled teens. James was called by God into the ministry in 2003 preaching his initial sermon on June 8th at Calvary Baptist Church. He was ordained July 29, 2012 and was called to pastor Mt. Sinai Baptist Church in Evansville, IN where he remained until his health declined in 2015. The Robards household was truly one that worshiped and praised the Lord, but on game night, it was a different story. Stevie loved the University of Louisville and his wife, Georgia, loved the University of Kentucky. Therefore, their house was divided on game night. In the true style of a Drill Sergeant, he loved to give orders to everyone from his children, down to the man who cut his grass. Stevie spent his life working hard and helping others whenever he could. Stevie leaves to cherish his memories, his wife of 16 years, Georgia; daughters: Kenya Robards of Henderson, KY; Monique Todd (Scottie) of Shelbyville, KY; sons: J. J. Robards , Kent Hayes both of Henderson, KY, Robbie Hayes (Dana), Derrick Hickerson both of Evansville, IN; siblings: Rev. Ozetta Kirby (Prentiss) of Chandler, Arizona, Anna Hatchett Page (Dwight) of Nashville, TN, Joenice Banks (Thomas), Kim Hogue, Joseph Robards all of Louisville, KY; a host of grandchildren, great grandchildren, nieces, nephews, cousins, friends, and his dear four legged friend “Angel”. Services are Friday July7, 2017 at 1:00 PM at New Jerusalem Baptist Church in Henderson with visitation on Thursday July 6, 2017 5-8 p.m at New Jerusalem Baptist Church. Burial will be in Fernwood Cemetery. Arrangements are entrusted to Mason Brothers Audubon Chapel. Leave condolences at www.masonbrothersfs.com.

The family of Rev. James Stephen Robards created this Life Tributes page to make it easy to share your memories.

Send flowers to the Robards family.