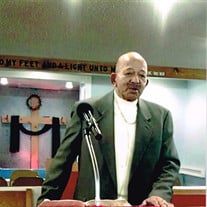 James Edward “Chuckie” Hayden was born May 24, 1940 from the union of Milton Hayden, Sr. and Martha (Hickerson) Hayden. Chuckie was married to Joyce Ann Hayden-Baker for approximately 19 years; as well as Louetta (Butler) Hayden for several years. Chuckie faithfully attended Little Canaan Baptist Church in Henderson, KY under the pastoral leadership of Reverend Willie Ellis over the past 3 years. Chuckie was a hard worker. He attended Douglass High School in Henderson, KY until he had to look for employment. He worked at Inland Container as a press operator for many years until his retirement. He was blessed to work for the KY Department for Transportation for several more years and retired from this position as well. During those retirements, he decided that he could not sit around doing nothing all day so he also worked at the Green River Health Department until his health declined. Chuckie provided for his family and was a good father. He continued to parent his children even after they were all grown by always telling them and anyone else things like, “That ain’t how you do that” or “Let me show you how to do it the right way.” And he was always right!!! Chuckie did acknowledge the accomplishments of his children and loved them all deeply. Chuckie never met a stranger and because of this he often had huge backyard barbeques where any and every one was welcomed. He was also known as a great softball/baseball player and later coached several local successful teams in the Tri-State area. One of his favorite past times was to enjoy a good ole’ western/cowboy show anytime of the day. Chuckie was an avid outdoorsman who enjoyed hunting, fishing, and has been quoted as saying, “there’s nothing like bringing the flock in” (referencing ducks/geese). Those who hunted with him could easily see the excitement on his face after a great day afield. On October 10, 2015, God called his “deer hunting, cowboy son” on home. Chuckie is preceded in death by his parents, Martha and Milton Hayden, Sr.; two brothers: Milton Hayden Jr and Richard Hayden; three sisters: Joyce Johnson Thomas, Barbara Jo “BJ” Davis, and Debra Rhodes; wives: Joyce Hayden-Baker and Louetta (Butler) Hayden. Chuckie is survived by his longtime girlfriend and companion, Audrey Powell. He is also survived by his three sisters: Shirley Leveridge of Pembroke KY, Charles Etta Hildreth of Evansville IN, and Linda Hayden of Evansville IN; his sons: Michael Cooksey of California, Kenny Martin of Panama City FL, Darryl Hayden (Rose) of Henderson KY, Steve Hayden of Rhode Island, Shawn Hayden (Shannon) of Henderson KY, Edward Johnson of Henderson KY, Omar Johnson (Sopu) of Henderson KY, Glenn Tillerson of Henderson KY, Tony Butler of Henderson KY, and Danzell Carter of Henderson KY; his daughters: Toni Martin of Indianapolis IN, Katrina Martin of Indianapolis IN, and Cesselly Carter of Henderson KY, Le’Charla Carter of Owensboro KY, and Ashley Carter of Owensboro KY; 24 grandchildren; and many great grandchildren, cousins, nieces, nephews, and other family and friends.

The family of James Edward Hayden created this Life Tributes page to make it easy to share your memories.

Send flowers to the Hayden family.