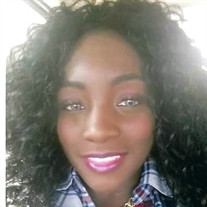 Ja’Meia Minnike Hamm Pettus, 32, sunrise on January 10, 1987 at 12:50 a.m. at Methodist Hospital in Henderson, KY and sunset on October 23, 2019 at 4:30 p.m. at Deaconess Midway Hospital in Evansville, IN after a long illness. She fought a good fight, but in the end, she was tired and had to have some rest. Ja’Meia, no matter how she felt, always greeted people with her lovely smile and a hug and would soon follow with the ending, “God Bless and I love you”. Ja’Meia loved her family and friends and would give her shoes off her feet if needed. She was always giving, never taking, or asking for things in return. She had a pure kind heart. She loved to cook, clean, sing, shop, and nursing people back to health, even though her own health was failing her. She received her Associates Degree in Applied Science on March 2007 and received certification/qualification in nursing in 2007. She received CPR and First Aid certification on 1/26/2011, EMT Certification on 6/17/2010, and PHTLS Certification on 5/16/2012. Ja’Meia worked at Ambulatory Surgery Center for Pain Relief for Dr. Steven Rupert in Evansville for 12 years until her health began to fail. Minor Outpatient Medicine (MOM) clinic was her second job. Too much work was never in Ja’Meia’s vocabulary. She was assigned different duties such as assisting physicians, phone nurse, surgical tech, initiating IV’s, drawing blood from patients for platelet rich plasma procedures, preauthorizing procedures/medications, sterilizing surgical equipment, pre-hospital care, etc. She received honors from Health Occupational Students of America, 2003-2005, Henderson County; High School Honor Roll 2000-2005; and National Honors Society in 2005. She also obtained many scholarships from Henderson County School. She was also an Honor Roll Student in College. Ja’Meia’s plan was to become a doctor with a full paid scholarship but her health failed. Ja’Meia Hamm Pettus was preceded in death by her maternal grandparents, George Sr. and Minnie Posey; paternal grandparents, Eula Mays and Willie Wilson; two of her favorite uncles, Ruben Wilson and George Posey, Sr; also a favorite cousin, Tommie Goines, Jr. She leaves to cherish, her husband Demetrice Pettus, Sr.; 2 sons, Demetrice, Jr. and Da’Mari Pettus all from Henderson, KY; her loving parents, Jimmy Sr. and Della Hamm; a brother, Jimmy Hamm, from Henderson, Ky; a host of aunts, uncles, cousins, family members and a host of friends. Contributions can be sent to R. Mason Brothers Funeral Home, 1001 Lincoln Avenue, Evansville, IN 47714. Fly High our Baby Girl. We didn’t want you to die but we know why.

The family of Jameia Pettus created this Life Tributes page to make it easy to share your memories.

Send flowers to the Pettus family.