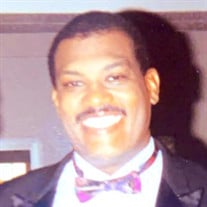 Ira Kenneth “Bubba” Martin from Fontana, California was born September 22, 1955 in Evansville, IN and went home to be with the Lord, February 1, 2021. His parents, Helen Delores Lester Martin and Ira Watson Martin, welcomed him to this world with so much love. Bubba, as he was nicknamed by his older sister, graduated from Glenwood Elementary School in 1969 and Central High School in 1973. At Central, Bubba lettered in basketball, football, and track. After high school graduation, he relocated to Pasadena, California and completed a Bachelor’s Degree from the local university. He retired from Cambro Products of Huntington Beach, CA as plant manager. If you were ever in his company, Bubba would have you in a continuous state of laughter. In fact, when he laughed everyone around him would laugh. Although he lived in California, he remained very connected to his family and friends in Evansville. Whenever, he decided to come to Evansville, it was always a surprise. He would always get a big kick out of just showing up on our doorsteps without letting us know he was coming. He literally had a heart of gold! His legacy of giving will last through eternity. Bubba poured into his daughter, stepson, sister, nieces, nephew, and his dear mother until the time of her transition. He was saved as a young child at New Hope Missionary Baptist Church and was baptized by Reverend W.R. Brown, Sr. He sang in the children’s and youth choirs under the direction of his talented mother, director extraordinaire Helen D. Martin. Bubba grew up to be an extraordinarily handsome and loving man who we will miss dearly. Meeting him in glory are: his mother: Helen; father: Ira; sister: Karen; grandparents: Henry and Frances Dudley Martin (paternal); Ruby Watkins Hines, and James Lester (maternal) and his aunt Verne. Missing him until the great reunion are: daughter, Chyra Martin, Pasadena, CA; stepson, Fred Williams (Erika), Reno, NV; sister, Pegi Martin Ellis; step-grandchildren Kenna and Halle Williams; niece Keidra Ellis; nephew Kameron Ellis; grandniece Jalyn Ellis, all of Evansville; aunt, Rita Lester, Louisville, KY; and many cousins and friends. Finally, his lifetime friend, Larry Young, will hold all of their boyish and mischievous secrets and memories close to his heart.

Ira Kenneth &#8220;Bubba&#8221; Martin from Fontana, California was born September 22, 1955 in Evansville, IN and went home to be with the Lord, February 1, 2021. His parents, Helen Delores Lester Martin and Ira Watson Martin, welcomed him to... View Obituary & Service Information

The family of Ira Kenneth "Bubba" Martin created this Life Tributes page to make it easy to share your memories.

Send flowers to the Martin family.