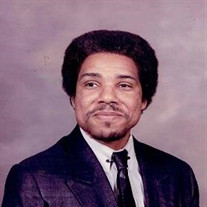 HUSTON LAWRENCE MCFARLAND went home to see his LORD in the early morning of March 5, 2016 at his home. He was the third child born to the late William Edward McFarland and Agnes Couch McFarland on December 11, 1952 in Evansville, IN. In addition to his parents, he was preceded in death by his brother, Norman Douglass. He professed his hope in Christ at an early age under the leadership of the late Rev. Dr. W.R. Brown, Sr. at the New Hope Missionary Baptist Church in Evansville. He was quite active in his church as a deacon and later received the “Man of the Year” award in 1996. Huston later moved his membership to the Memorial Missionary Baptist Church, under the leadership of Pastor Adrian Brooks, where he continued serving as a deacon and in many other capacities. Huston was a great bible scholar and his many good deeds toward others showed how he lived his life. Huston was a great track star and began in 1969 under the late Coach Ed Claybourne while attending the old downtown Central High School. The Evansville paper featured him as one of the greatest track runners of the time, running a 10.2 in the 100 meter as a sophomore. During his senior year at F. J. Reitz High School, he ran for the late Coach Bob Padgett. He came in first in the 220 and also ran a 9.9 100 meter in the 440 relay anchor. He graduated from Reitz and went on to attend Vincennes University. Huston later went to work for CSX Railroad where he was an inspector for the trains. He retired early, after 30 years, due to poor health. Huston leaves to mourn a daughter, Rukiya Durden; a son, Amadi (Rhonda) McFarland; a stepson, Justin (Erica) Givens; grandchildren: Kaylyn Dulin, Janessa Foltz, Jaden Foltz, Anija Durden, and Gabriel Durden – all of Evansville; one sister, Patricia M. Wisdom of Evansville; one brother, Pastor Jasper David (Deborah) McFarland; nieces: Nikia, Jenae, and Brittini McFarland – all of Phoenix AZ and Starla Wisdom (Kenneth) Allen of Burlington KY; one aunt, Helen White of Florrisant MO; and his favorite “companion,” his dog “Pooches,” who was with him to the end. Services will be held Friday, March 11, 2016 at 11:00am at Memorial Baptist Church. Visitation will be Thursday, March 10, 2016 from 2:00pm – 4:00pm at Mason Brothers Memorial Chapel followed by a wake service from 6:00pm – 8:00pm at Memorial Baptist Church. Burial at Springdale Cemetery in Sebree, Ky. Condolences may be left at www.masonbrothersfuneralservices.com

HUSTON LAWRENCE MCFARLAND went home to see his LORD in the early morning of March 5, 2016 at his home. He was the third child born to the late William Edward McFarland and Agnes Couch McFarland on December 11, 1952 in Evansville, IN. In addition... View Obituary & Service Information

The family of Huston L. McFarland created this Life Tributes page to make it easy to share your memories.

HUSTON LAWRENCE MCFARLAND went home to see his LORD in the early...

Send flowers to the McFarland family.