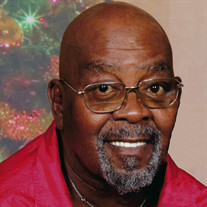 Henry “Bean” Cartwright Jr., 81, went to be with the Lord on Sunday July 22, 2018. Born June 15, 1937 in Evansville IN, he was educated in the Evansville Vanderburgh School system. He served in the United States Armed Forces for 2 ½ years while stationed in Germany. He was a member of the Lincoln Clark- Douglass Alumni Association, the Class of 1956, and the Golden Age Breakfast Club. He was a faithful member of Greater St. James Missionary Baptist Church where he sang in the Male Chorus, drove the church van, and worked at the C-Rec. He was also a Deacon in training. For many years Bean worked for George Clemmons at Club Paradise. He loved to cook, fish and shoot Pool. Utilizing his culinary skills, Henry was a chef at the Petroleum Club and retired from the Holiday Inn as a chef as well. Henry was preceded in death by his parents, Henry and Bertha Cartwright; brothers: Nathaniel, Benny, and Billy Cartwright; and sisters: Rosalee Lucas and Mary Lou Sloan. He is survived by his loving and devoted wife of 19 years: Joyce Sargent Cartwright; seven sons: Gary, Tommy, Germain, Johnny, and Michael Cartwright, Rodregus Sargent, and Donya Hughes; four daughters: Tammy Outlaw, Regina, Carla, and Crystal Cartwright; one sister, Ceola Williams; one brother, Samuel Cartwright; a host of grandchildren, great grandchildren, great great grandchildren; and many nieces and nephews. Special thanks to granddaughter, Tasha Collins.

The family of Henry Cartwright Jr. created this Life Tributes page to make it easy to share your memories.

Send flowers to the Cartwright family.