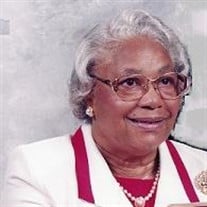 Hazel Milan, 85 years old, of Evansville, Indiana was accepted into her heavenly home on Sunday, July 16, 2017 at 6:30 pm at Deaconess Hospital with her children and grandchildren by her side. She was loved very much by her family and friends. Hazel Milan was born September 14, 1931 in Evansville, Indiana to the late Leslie and Rosa (McNeal) Johnson. She was united in marriage to her late loving husband of 57 years Ira Milan (2007). Hazel Milan dedicated her life to God, church, her husband, children, and family. She was affectionately known as "Mother Milan" by family, friends, and church members. She served on the Mother's Board, held the position as Church Mother, and participated in the church choir for several churches as she showed her devotion to loving the Lord, reading, learning, living his word, and singing His praises. She also loved to cook in the kitchen and was an awesome cook. She was preceded in death by her parents, husband, 1 sister, and grandson; Marc Milan. Mother Milan is survived by her 11 children and their spouses, Ira "Butch" (Louise), Terry (Donna), Donna (Joe), Milton (Maria), Regina (Dennis), Alvert (Ginger), Tracey (Lisa) of Buford, Georgia, Harriett (Ronnie), Karen, Stephen, and David Milan, and Sister Bertha Evans from Evansville. She also leaves behind 29 grandchildren and 55 great grandchildren. Home going services are scheduled for Monday, July 24, 2017 at 11 am CST at Memorial Baptist Church, 605 Canal Street, Evansville, Indiana 47713. The viewing on Monday is from 10 to 11 am at the church. Apostle William W. Simmons will officiate the service. Friends and family may visit Sunday, June 23, 2017 from 6 to 8 pm at Mason Brothers Memorial Chapel at 1001 Lincoln Ave., Evansville, Indiana. Burial on Monday, July 24, 2017, immediately following the home going, at Sunset Memorial Park Cemetery.

Hazel Milan, 85 years old, of Evansville, Indiana was accepted into her heavenly home on Sunday, July 16, 2017 at 6:30 pm at Deaconess Hospital with her children and grandchildren by her side. She was loved very much by her family and friends.... View Obituary & Service Information

The family of Hazel Udalia Milan created this Life Tributes page to make it easy to share your memories.

Send flowers to the Milan family.