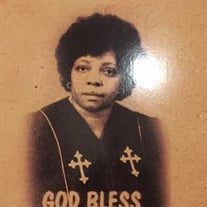 Reverend Dr. Gwendol Fay Brown McCaskill was born on May 27, 1941 in St. Charles, Kentucky. She departed this life on July 12, 2016 at Baptist Health Hospital in Madisonville, Kentucky. Dr. McCaskill, or “Fay/Aunt Fay”, was a third-generation member of the African Methodist Episcopal Zion Church and followed her maternal grandfather’s footsteps into ministry in the denomination. Despite her many pastoral positions within the Madisonville District of the Kentucky Conference, she maintained life-long membership at Gough Tabernacle A.M.E. Zion Church in Earlington, Kentucky. Fay attended elementary and high school at J.W. Million in Earlington, Kentucky. She graduated as her class’s valedictorian. At the apex of the Civil Rights Movement, she attended the University of Louisville and integrated the on-campus housing of the Belknap Campus, earning a Bachelor of Arts (BA) in Psychology. She would continue her educational pursuits at Temple University. After the death of her husband, she was conferred a Doctor of Philosophy (PhD) in Human and Organizational Development from the Peabody College of Education and Human Development of Vanderbilt University. She had a successful secular career as a social worker, educator, administrator and consultant. In fact, she was the first African American to serve as a social worker in Hopkins County, Kentucky and one of the first in the State of Kentucky. Her journey into pastoral ministry began as the musician for the children’s choir for Gough Tabernacle. She utilized her musicianship as the director of the Young Adult Choir at Gough before acknowledging her call to preach the Gospel of Jesus Christ. Ordained under the Missionary Rule of the AME Zion Church, her first pastorate was at Barnes Chapel in Sebree, Kentucky. During her 37-plus years of service, Dr. McCaskill would serve as supply minister to churches throughout the Madisonville District and pastor in Sebree, Kentucky; Nashville, Tennessee; White Plains, Kentucky; Russellville, Kentucky and Madisonville, Kentucky. The pastorates in Sebree and Nashville were served concurrently. Fay would travel two hours to Nashville for morning service and then three (3) hours north from Nashville to serve Sebree in the afternoon. Upon the death her life-long friend Reverend James H. Dunlap, she was appointed Presiding Elder of the Madisonville District in 2004 – the first woman to hold this position in the Kentucky Annual Conference. She continued in that capacity before stepping down after eight (8) years. She served as pastor of Zion Temple AME Zion Church for over 20 years, retiring in early June 2016. Dr. McCaskill served as Conference Director of Christian Education, and as a member of the Discipline and Codification Committee of the AME Zion Church. She was influential in the establishment of and active in the Assembly of Christian Educators ( ACE) and the Presiding Elders Council, service as Vice President. Her civic contributions to Hopkins County and the State of Kentucky are too numerous to list, however, she took pride in her service as Chair of the Human Resources Committee of the Madisonville-Hopkins County Library Board. She was an avid reader, lover of good music and fashion, an excellent cook and a gifted seamstress. A friend and an encourager to all who knew her, she was diligent in her pursuits of fairness and excellence. She demanded the same from those who had the benefit of knowing her. Dr. McCaskill was preceded in death by her husband, Sgt. Maj. Alexander McCaskill, II; Her parents, Nathaniel “Snook” Brown and Callie Frances Quarles Brown; two sisters- Barbara Louise Brown Walker and Sandra Jean Brown Cooper and a brother, Billy Ray Brown. She is survived by her three children- Alexia Fay McCaskill, of Boulder Colorado; Annissa Gertrude McCaskill-Clay, of Belleville, Illinois; and Alexander McCaskill, III of the home; a grandson whom she loved with all her heart, Mauriel Ramon Micah Clay; a niece and nephews/children of the heart- Natalie Frances Cooper, McArthur “Boo” Cooper, and Anthony Dorel Walker; and brother-in-love James Alfred Walker. She also leaves behind a host of other nieces, nephews, other relatives and God-children. She will be sorely missed by all who knew her. Visitation will be Friday, July 15, 2016, 4-8:00 pm at Zion Temple AME in Madisonville KY. Service will be Saturday, July 16, 2016, 2:00 pm at Gough Tabernacle in Earlington KY. Funeral arrangements are entrusted to Mason & Sons Funeral Home in Madisonville KY,

Reverend Dr. Gwendol Fay Brown McCaskill was born on May 27, 1941 in St. Charles, Kentucky. She departed this life on July 12, 2016 at Baptist Health Hospital in Madisonville, Kentucky. Dr. McCaskill, or &#8220;Fay/Aunt Fay&#8221;, was a third-generation... View Obituary & Service Information

The family of Dr Gwendol Fay McCaskill created this Life Tributes page to make it easy to share your memories.

Reverend Dr. Gwendol Fay Brown McCaskill was born on May 27,...

Send flowers to the McCaskill family.