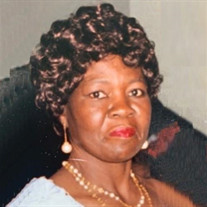 Geneva W. Stewart, 83, entered into eternal peace on Tuesday, April 2, 2019, at her Evansville, IN home surrounded by family and friends. Geneva was born on January 12, 1936 in Birmingham, AL, the daughter of the late Joe and Minnie Dale Willingham. She graduated from Ullman High School (Birmingham, AL) in 1953. At the age of 19, she married her sweetheart, Roosevelt “Bell” Stewart and they remained married until his passing. She attended and was baptized at Zion Star Missionary Baptist Church when she was 11 years old and served as an usher for many years. She later attended First Baptist Kingston before moving to Indiana where she attended with her daughter, New Hope Missionary Baptist Church. Geneva will forever be remembered for having a gentle spirit, being a role model of womanhood and dispersing wise recitations. She loved to crochet and was an awesome seamstress and throughout her life, taught many of her friends how to do both. She had a sense of humor and enjoyed watching and attending WWE. In the last few years, she was often seen dancing to her own tune, with or without music. She was mother to many and considered a friend by most who were blessed to know her. She had a loving and generous heart and was always helping, sharing and giving to others. She was predeceased by her beloved husband of 40 years, Roosevelt Stewart in 1996; sister, Catherine Willingham Jacobs of Buffalo, NY; brother-in-law/son, Isaac Stewart in 1989; and newborn granddaughter, Andrea Yvette Eldridge. She leaves her loving memories to be cherished by her two daughters: Sabrina Stewart-Thomas of Evansville IN and Latresa Stewart Eldridge (Undray Sr.) of Birmingham AL; grandchildren: Kristian Rena, Undray Eldridge Jr., Joshua Roosevelt, Latrell Jobe, and Shantina Eldridge; sisters-in-law: Priscilla Stewart-Richards of Merrillville IN and Mary Ann Stewart of Flint MI; brother-in-law, Willie James Poindexter of Birmingham AL; nieces and nephews: Patricia Hayes Stallings and Gail Hayes King (John) of Buffalo NY, Lorraine Stewart Williams (Eddie) of Houston TX, Rose Marie Stewart Ayres (Gerald) of Birmingham AL, Lavarne Stewart McReynolds (James Jr.) of Birmingham AL, Elaine Stewart of Dayton, OH, Curtis Stewart (Barbara) of Summerville SC, Joel Stewart (Donna) of Birmingham AL, Roosevelt Stewart and Ricky Roby of St. Louis MO; cousins: JoAnn Willingham Brown( Rev. Reginald Brown) of Birmingham AL, Robert Earl Harris, Bernice Harris (Douglas), Lorenza Harris, all of Buffalo NY, Diane Harris Eades of Chicago IL; in-law and friend, Sidney Thomas and childhood & lifelong friend, Elizabeth Washington - both of Birmingham AL; and many family and friends. Friends and relatives are invited and may call at the New Hope Baptist Church, 663 W.R. Brown Way, Evansville, IN, Rabon L. Turner, Pastor, Thursday, April 4, 2019 from 3:00 -5:00 pm. with a short service beginning at 4:00 pm. Funeral services will be held Monday, April 8, 2019 at 1:00 pm at the South Elyton Baptist Church, 100 First Street South, Birmingham, AL. Reginald Brown, Pastor. Burial will be at the Zion Memorial Gardens, 501 Tarrant Huffman Rd, Birmingham, AL 35206. The family wishes to extend their gratitude to Southern Care Hospice Services, especially Helen, who lovingly cared for our mother during her illness.

Geneva W. Stewart, 83, entered into eternal peace on Tuesday, April 2, 2019, at her Evansville, IN home surrounded by family and friends. Geneva was born on January 12, 1936 in Birmingham, AL, the daughter of the late Joe and Minnie Dale... View Obituary & Service Information

The family of Geneva Willingham Stewart created this Life Tributes page to make it easy to share your memories.

Send flowers to the Stewart family.