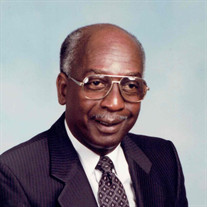 Rev. Garrett Brockman Grinstead, Jr. was born August 25, 1932 to the late Garrett Brockman Grinstead and Mary Lula Grinstead of Earlington, KY. He departed this life March 9, 2016 at the Joseph “Eddie” Ballard Western Kentucky Veterans Center in Hanson, KY. Rev. Ginstead professed his hope in Christ at an early age and united with the Mt. Zion Missionary Baptist Church where he remained a member until he was called home. He was a former member of the Male Chorus and a very active church member. Rev. Grinstead was a graduate of J. W. Million High School in Earlington, KY and received a Bachelor of Theology degree at the Hopkinsville College of the Bible in 1968. Rev. Grinstead was called to preach the gospel and was licensed in 1962. He was ordained in 1966 in the Gospel Ministry by the Mt. Zion Missionary Baptist Church pastor, Rev. H. B. Taylor. He pastored several churches throughout Western Kentucky over the years and participated in many different capacities including serving as Vice Moderator of the First District Association of Baptist in Kentucky. Rev. Grinstead worked as a coal miner for 33-1/3 years. He retired from Providence 1. He was fondly called “Preacher” by his friends at the mines and was a member of the United Mine Workers of America. Rev. Grinstead was a veteran of the United States army during the Korean Conflict and was honorably discharged in 1960. He married Lula Pike who preceded him in death in 1985. In addition, he was preceded in death by his parents; his sisters: Georgia Grinstead, Virginia Johnson, Charlie Grinstead, Leola Ballard; and his brother, Chiles E. Grinstead. Rev. Grinstead leaves behind to cherish his loving memories, his wife of 28 years, Ludella Grinstead; his daughters, Valerie Haley of Madisonville KY and Joyce Hamilton of Earlington KY; god son Alonzo Simms of East Chicago IN; grandchildren: Leah, Anna-Stacia, and Michael Haley – all of Madisonville KY, and Stephanie, William, Johnny, and Steven Hamilton – all of Earlington KY; nephew, Timothy (Tracey) Grinstead of Chester VA; nieces, Donna Grinstead of Murray KY and Winona Johnson (Mike) Pyles of San Antonio TX; sister-in-law, Amelia Gail Grinstead of Madisonville KY; and a host of cousins and friends. Services will be held Friday, March 18, 2016 at 10:45am at Mt. Zion Missionary Baptist Church in Earlington, KY. Wake services will be held Thursday from 6:00pm – 8:00pm also at the church. Burial will be Monday, March 21, 2016 at Kentucky Veterans’ Cemetery West in Hopkinsville, KY.

The family of Rev. Garrett Brockman Grinstead, Jr. created this Life Tributes page to make it easy to share your memories.

Send flowers to the Grinstead family.