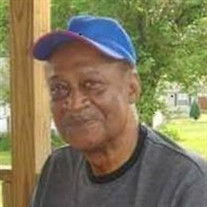 Frank Edward Hampton, aka. Big Frank left us on January 13th, 2020 with his daughter LaTonya by his side at Baptist Health in Madisonville, Kentucky. Frank was born January 2, 1934 unto Benjamin Frank and Ella Mae Hampton. He graduated from... View Obituary & Service Information

The family of Frank Edward Hampton created this Life Tributes page to make it easy to share your memories.

Send flowers to the Hampton family.