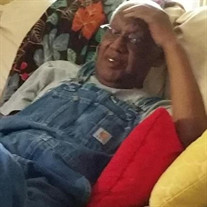 Felix “Buster” Reynolds, Jr., was born in White Plains, Kentucky to Felix, Sr. and Mae Ella Reynolds on April 6, 1934. Buster confessed and accepted Jesus Christ as his personal Lord and Savior on Wednesday, September 20, 2017. He retired from Jim Smith Contracting where he worked in the area of Logistics up until the age of 80. After that time, he moved back to Mortons Gap, Kentucky. Buster loved to cut the grass and keep up the yard. If the grass even looked like it was starting to grow you would most likely find him on his riding lawnmower cutting it. On Saturday, February 3rd, Buster came home and laid down to take a nap. He went to sleep on this side and at 2:00 a.m. on Sunday, February 4th, he woke up on the other side, in the arms of His Loving Savior, Jesus Christ. He was preceded in death by his mother and father: Felix Reynolds, Sr. and Mae Ella Reynolds; four sisters: Shirley Ann Sutton, Jewell Powell, Imogene Martin, and Lucille Reynolds; two brothers: Harrison Reynolds and Freeman Reynolds and one daughter, Sharon Reynolds. He leaves to treasure his memory, one son, Timothy Maypray of Madisonville, KY; five daughters: Karen Reynolds of Mortons Gap, KY, Betty Reynolds Johnson (Robert) of Oceanside, CA, Angela Townsend (Lafayette) of Huntsville, AL, Deborah Reynolds of Orlando, FL and Barbara Mills (Renny) of Orlando, FL; two brothers: Robert Reynolds of Providence, KY and Jerry Reynolds (Rita) of White Plains, KY; two sisters: Wanda Jagoe of Madisonville, KY and Martha Yancy (Royce) of Earlington, KY; a host of grandchildren, great-grandchildren, nieces and nephews.

The family of Felix Reynolds Jr. created this Life Tributes page to make it easy to share your memories.

Send flowers to the Reynolds family.