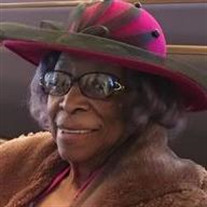 Eva Lois Turner was born on February 15, 1930. She passed away on January 9, 2020. Eva was born to Anna (Kivel) Bradley and Willie Arnold who both preceded her in death. Eva attended Lincoln School where she was a cheerleader. She was a graduate of the class of 1947. In later years, she joined her graduating class and became a member of the Lincoln-Douglas Alumni. After moving to Indianapolis, she worked at various jobs, but her long-term employment was with the Marion County Welfare Dept. where she was a Supervising Clerk. She retired from the Welfare Department in 1987. Upon returning to Evansville, she worked the Summer Feeding Program and at the After-school Day Care in the Evansville-Vanderburgh School Corporation. Early in her life, she worked with a group of girls called the Y-Teens at the YWCA. Eva started working with the Girl Scouts Organization around 1969 and continued being involved with this organization after moving to Evansville from Indianapolis in 1987. She received recognition as well as obtaining the Thank You Badge. Eva was a dedicated worker in the church. She belonged to the Emmanuel CME Church in Indianapolis where she held various positions in the church and was a member of the AB Bowman Guild. As a member of the Trinity CME Church in Indianapolis Eva enjoyed participating in the Craft Club. After moving to Evansville, she joined the Cleaves CME Church where she became a member of the Trustee Board, sang in the Cleaves Chorus and worked diligently in the kitchen preparing meals for special events. Later in her Christian journey, she was baptized at the Triumphant Seventh -day Adventist church in Natchez, MS. Eva spent the last 10 years living with her daughter and son-in-law in Florida and Tennessee. She most recently attended the Maranatha Seventh-Day Adventist Church in Jackson, TN. She is survived by her daughter and son-in-law: Bertha and Curtis Hall; aunt: Dorothy Carson; sister: Carolyn Grant; and a host of cousins, nieces, nephews, and friends.

Eva Lois Turner was born on February 15, 1930. She passed away on January 9, 2020. Eva was born to Anna (Kivel) Bradley and Willie Arnold who both preceded her in death. Eva attended Lincoln School where she was a cheerleader. She was a... View Obituary & Service Information

The family of Eva Turner created this Life Tributes page to make it easy to share your memories.

Send flowers to the Turner family.