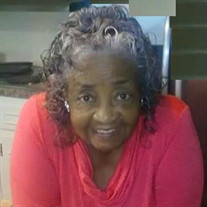 On April 14, 2018 Mother Esther Patton, 77, entered the gates of Heaven to be reunited with her husband Elder Frank Patton, Sr. She raised 8 children with Christian love. Mother Patton lived and stood for holiness! She loved the Lord! Mother... View Obituary & Service Information

The family of Esther Mae Patton created this Life Tributes page to make it easy to share your memories.

Send flowers to the Patton family.