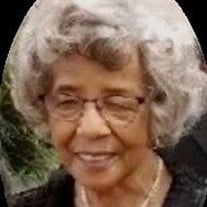 Mother Ella Mae (Brown) Minor was born on September 3, 1930 in Erin, Houston County, Tennesee to Walter Grady & Christa Bell Marks Brown. She attended W. H. Hensley School and graduated as the class valedictorian. Mother Minor had two siblings, Dorothy Brown who passed away as an infant, and Walter Samuel Brown who also preceded her in death. Mother Minor entered into holy wedlock on September 5, 1948 to Raymond Earl Minor after which the two of them relocated from Erin, Tennesee to Evansville, Indiana. They shared seventy-one years of marriage and were a great team together. She was a member of Nazarene Missionary Baptist Church for over fifty-five years, where she participated on the Mother's Board, The Chorus Choir, and participated on the Missionary Team before relocating to Indianapolis for her children to assist with her elder care. Mother Minor was a powerful presence, in spite of many years of being afflicted with Multiple Sclerosis which rendered her legally blind. She was a breast cancer survivor who not only persevered, but worked diligently with the Blind Association, stayed physically fit by walking daily, riding her bike and staying busy touching the lives of everyone she encountered; she never met a stranger. She had an unquenchable love for the Lord and participated in every spiritual event she could up to her very last day on this earth. She is survived by her loving husband, Raymond Earl Minor. She was the mother of four children; Paul William who preceded her in death as an infant, two daughters, Gloria Jean Harris, Cheryl Elizabeth Webb (Cameron Taylor), both of Indianapolis, IN and a second son, Steven Carl Brown (Kimberly), of Kokomo, IN. She is also survived by her seven grandchildren; Timothy Johnson (Lisa), Tony Johnson, Christa Wilson (Anthony), Tracey Johnson, Todd Gatling, Ryan Jones, Jeremy Enzy; 22 great-grandchildren; 14 great-great-grandchildren, nieces, nephews, cousins, and friends who all loved her very much. Mother Minor leaves her Godly spirit with her two church families as well – Nazarene Missionary Baptist Church in Evansville and the Eastern Star Church in Indianapolis.

The family of Ella Mae Minor created this Life Tributes page to make it easy to share your memories.

Send flowers to the Minor family.