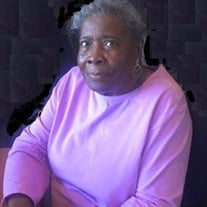 Elizabeth Jane Skinner Buckner daughter of the late Martha Oates Leavell and Herbert Skiinner was born on December 6, 1928 in Evansville, IN. She professed a hope in Christ at an early age at Eastview Baptist Church in Madisonville, KY under the leadership of Rev. Jones, Pastor. She attended Branch Street Elementary School and graduated from Rosenwald High School. on June 24, 1966, Elizabeth was united in Holy Matrimony to Louis Robert Buckner, who preceded her in death. She had a daughter who was her pride and joy; Brenda Louise Taylor. She was retired from Hopkins County Hospital where she held the positions of Surgery Tech, Supervisor of Housekeeping, and lastly, X-Ray Tech. After her marriage she became a faithful member of Mt. Zion Baptist Church serving throughout the years as an usher and briefly as a member of the choir. Ms. Liz, as many referred to her, believed in living a life that exemplified her faith and love in Jesus Christ. She loved her pastor and her church. She also had a strong love and devotion to her family. She enjoyed humming & singing, working puzzles, and sewing. Ms. Liz was the matriarch of 5 generations of her family. Her grandchildren called her Grandma or Nanny. One of her favorite scriptures was the 23rd Psalm and her favorite songs were “I Started with Jesus” and I’m Going Through”. On March 17, 2018, Ms. Liz transitioned from Earth to Glory with her family who went before her: her parents; her husband, 3 sisters: Marion Wilkes, Shirley Collins, Helen Hodges; 2 brothers: Burnice Oates, Clinton Oates; a son-in-law; two grandsons. Her memory lives on in the heart of her loving daughter Brenda. Also celebrating her victory in Christ are, grandchildren: Andrea (Avery), Fairley (April), Beulinda (William); great grandchildren: Avery Jr. (Sheree), Nikki (Tony), Markeita, Jeffrey (Heather), Ashley, Alexandra, Alexis; great great grandchildren: Zakiya, Zamar, Zavion, Trevon, Tony, Tavonte’, Jeremiah, Aliyah, Autumn, Aubrey, an Austin; a host of loving nieces, nephews, cousins; extended family: William Burrus who called her Ms. Grandma, Patricia Leavell who called her Ms. Liz; devoted & loving friends: Martha & Royce Yancy. Services are 1:00 p.m. Saturday March 24, 2018 at Mt. Zion Baptist Church in Earlington with visitation from 10:00 a.m. until service. Burial in Oak Wood Cemetery. Arrangements entrusted to Mason & Sons Funeral Home. Leave condolences at www.masonbrothersfs.com.

Elizabeth Jane Skinner Buckner daughter of the late Martha Oates Leavell and Herbert Skiinner was born on December 6, 1928 in Evansville, IN. She professed a hope in Christ at an early age at Eastview Baptist Church in Madisonville, KY under... View Obituary & Service Information

The family of Elizabeth Jane Buckner created this Life Tributes page to make it easy to share your memories.

Send flowers to the Buckner family.