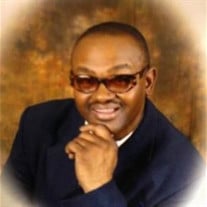 Dudley Alfred Johnson, Jr. was born on June 1, 1957 to the late Dudley Alfred Johnson, Sr. and the Late Gilda Grace Robards Johnson in Henderson County Kentucky. He departed this life into eternal life on August 27, 2018 at Jewish Hospital in Louisville, KY. He accepted Christ at the age of 9 under the pastorage of Rev. Austin Bell. Dudley attended Henderson City High School and played basketball for the Henderson City High Flash from 1973-1975. He served in the United States Army from 1977-1981. “Big Dud” or “Dudley-DoRight”, as he was affectionately called, was a Christian man of God. Dudley knew the Lord and he didn’t mind demonstrating his knowledge to anyone. Being the people-person that he was, Dudley never met a stranger. He was well-loved by family and friends. He leaves to cherish his memory, one son: DaShawn Johnson; one sister: Donna Ronni Johnson; one niece DeAnna (Johnson) Burress; one nephew: James Oldham; one great-niece: Kayla Johnson and one great-nephew Kody Johnson all of Henderson, KY; his beloved companion/caregiver: Donnetta Stott of Louisville, KY; six grandchildren: Breasha Rudolph; Corbin Johnson, and Accacia Johnson all of Evansville, IN, Corien Daniel of Louisville, KY, Issiah Johnson and Kyrin Jones both of Henderson; 10 great-grandchildren; 3 cousins who were like brothers: Ervin Johnson, Clarence Calhoun, both of Henderson, George Davis, Jr. of Grand Rapids, MI; 3 aunts: Jessye Armstead of Henderson, Lottie Swope of Evansville , Maxine Davis of Grand Rapids; one uncle: Leonard Johnson of Henderson: special friend of the family: Rayana Daniel, and a host of other cousins and friends. Dudley, you will be in our hearts forever. Rest in Heaven and fly high.

The family of Dudley Johnson Jr. created this Life Tributes page to make it easy to share your memories.