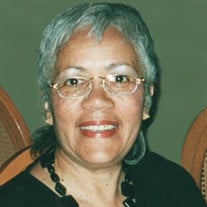 Born July 11, 1938 in Henderson, Kentucky to Dorothy Lucille Burris and Jack Wheat Shirley, Dorothy Jean Shirley accepted Jesus Christ as her Savior at an early age at First Missionary Baptist Church. She was a member in musical service and various roles for Greater St. James Missionary Baptist Church, First Ebenezer Baptist Church, and Metropolitan Seventh-Day Adventist Church before returning to First Baptist where she was a mother of the church. Affectionately known as “Little Dot,” Dorothy developed a love of the piano at an early age. A self-taught pianist, she began playing for the church choir around the age of 12. Many years later, she added the organ to her musical repertoire, allowing her to create more colorful choral arrangements. For over 60 years, Dorothy directed and played for numerous choirs, churches and organizations in the tri-state area. In the midst of all of her choir work, Dorothy was also a founding member of the Voices of Glory gospel ensemble which, in 2003, was awarded the “Pioneer Award” for extraordinary contributions to gospel music by the Evansville chapter of the Gospel Music Workshop of America (GMWA). Additionally, Dorothy was inducted into the Evansville chapter of the GMWA Hall of Fame, an honor she cherished and appreciated. When presented with the recognition award, she was appropriately described this way: "In her nearly [60] years of playing the piano, she has played for many churches, but never played in a 'roadhouse'. She admonished the young musicians to continue to play gospel music and to stay with the church." In addition to spending time with her children of whom she was most proud, Dorothy shared her musical gifts by teaching others how to play the piano, especially the “young folks.” Dorothy worked in administration for McLean Trucking Co. and Atlas Van Lines in Evansville, from where she retired to care for her mother, faithfully, for 7 years. She leaves to cherish her memory a brother, John Gilbert Shirley of Evansville, Indiana, four children: Sherrilynn Mitchell Tolliver (Gerald) of Capitol Heights, Maryland, Daryl Allen Mitchell of Evansville, Indiana, Pamela Horn Hall (Ricco) of Upper Marlboro, Maryland, and Timothy Ray Horn (Ayana) of Portland,Oregon; five grandchildren: Paul Allen Osei Mitchell, Winston Cloye Tolliver,Jaylan Carnell Hall, Amiri Paul Horn and Imani Rose Horn; and a host of loving cousins, nieces, nephews and friends. She is preceded in death by her father, Jack Wheat Shirley, mother, Dorothy Burris Shelton, stepfather, Luvall Oswald Shelton, and brothers Robert Lee(Bobby) Shirley and William Donald (Billy) Shirley. Dorothy will be remembered for her strong faith in our Lord and Savior Jesus Christ, her ability to listen to those who sought advice, comfort and solace, her love for others, her beautiful singing and piano/organ playing, her love of elegant home décor, and her stylish fashion. Even in her winter season, Dorothy praised God all day long for “His grace and mercy that never ends.” In lieu of flowers and in honor of the legacy of our mother, the family requests your consideration of a monetary donation, or a donation of your time in memory of Dorothy Shirley to: www.mychemobuddies.com ww5.komen.org www.cancer.org www.heritagehospice.org

Born July 11, 1938 in Henderson, Kentucky to Dorothy Lucille Burris and Jack Wheat Shirley, Dorothy Jean Shirley accepted Jesus Christ as her Savior at an early age at First Missionary Baptist Church. She was a member in musical service and... View Obituary & Service Information

The family of Dorothy Jean Shirley created this Life Tributes page to make it easy to share your memories.

Send flowers to the Shirley family.