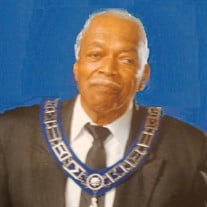 Rev. David Washington Pettie was born on October 9, 1925 and departed this life on January 28, 2020 at 3:57 a.m. at Union County Methodist Hospital in Morganfield, KY. He was preceded in death by his loving wife, Vera Lee Pettie of 56 years and his three children (Mary, Robert, and Kenneth). Rev. Pettie was born in Earlington, KY to the late Robert Arthur and Rutha Lee Pettie. Rev. Pettie was well-educated and had a wealth of knowledge well beyond his years. He was fondly known to most as Mr. Rammy, Rammy, and Rambo. He was an avid fisherman and known for his expertise in fly fishing and enjoyed hunting as well. He was a 50-year member of the Masonic Lodge. Two of his favorite eating spots were B&H in Morganfield and Ralph’s in Henderson. Rev. Pettie played a key role in the civil rights movement in the 1954 decision of Brown versus The Board of Education. He was recorded, interviewed, and acknowledged by the Kentucky Historical Society on August 6, 2001. He will be well remembered for his contributions and efforts in helping to close the gates to educational segregation. Rev. Pettie retired from Peabody Coal Company and also worked at Breckinridge Job Corp Center. He loved his family, friends and church. He will truly be missed by all. Rev. Pettie is lovingly remembered by his children: Joyce Tubbs (Sylvester) of Fort Wayne, IN, David Pettie, Jr. (Mae ) of Fort Wayne, IN, Keith Pettie of Fort Wayne, IN, Sharon Combs of Louisville, KY, Zelinda Fellows of Morganfield, KY, Edgie Burks, Jr. (Rochelle) of Sturgis, KY, Clara Caldwell (Renwick) of Orlando, FL, and Vanessa Lee of Paducah, KY; 15 grandchildren, 13 great-grandchildren, and a host of nieces, nephews, cousins, and friends. Funeral services will be at 12:00 p.m. on Saturday, Feb 1 at Mt. Sterling Cumberland Presbyterian Church in Sturgis, KY. Visitation will be at 10:00 a.m. until service time. Burial will be at High Hill Cemetery in Sturgis, KY.

Rev. David Washington Pettie was born on October 9, 1925 and departed this life on January 28, 2020 at 3:57 a.m. at Union County Methodist Hospital in Morganfield, KY. He was preceded in death by his loving wife, Vera Lee Pettie of 56 years... View Obituary & Service Information

The family of Rev David Washington Pettie created this Life Tributes page to make it easy to share your memories.

Send flowers to the Pettie family.