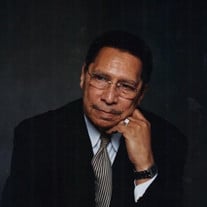 David Lamoyne Adams, Sr. was born in Evansville, IN to David Hobart and Gladys L (Proty) Adams on January 8, 1939. He transitioned to be with the Lord at 6:00 p.m. on October 27, 2021. David was educated in the public schools of Evansville. While in school he won the Evansville Golden Gloves Award. He enlisted and served in the United States Marine Corps. Realizing the importance of education, he completed his undergraduate degree and continued his pursuit to learn at Indiana Wesleyan University where he received his Master of Business Administration. Upon his return to Evansville from the military, he went to work at Whirlpool Corporation and later the auto industry in Detroit. Gov. Otis Bowen appointed him as Chief Administrative Law Judge for the State of Indiana which required him to move to Indianapolis. His work with the state continued under the governorship of Robert Orr. Before joining the state government, he worked with the Indianapolis Chamber of Commerce. He relocated to work at the Job Corps Centers in Louisville and Breckenridge and as a civilian for the United States Air Force. He served as a consultant to the Indianapolis chamber until his health failed. David was always a believer in Christ. He was baptized at the Nazarene Baptist Church under the pastorate of Rev. Mitchell D. Banks. He united in his middle adult life with Eastern Star Baptist Church of Indianapolis and upon his retirement and return to Evansville he united with the Mt. Olive Galilee Baptist Church. David was a man of character. He loved his family and saw to it that they were supported and provided for at all times. He instilled in his children a hearty work ethic and a drive to accomplish their goals in life. He always encouraged their dreams but had hard conversations when they were not performing to the best of their abilities. His ministry was working with the youth in our community serving as a mentor, counselor, and as a role model to young adults who were the products of one-parent households. David was a servant leader and was recognized throughout his professional career as a pioneer, encourager, civic leader, community activist and advocate, for his abilities as an administrator, advisor, and collaborator. David was also known for his sense of style and professional dress. His shoes were always shined. He would wear a laundered shirt, crisp tie, and sharp suit. That fashion style was always accompanied by a wide smile and a firm handshake. After that, it was down to business. He married Regina Moorman and together they were the parents of four children. He later married the former Mary Louise Wilkerson and they blended the two families together as one. David is preceded in death by his parents and a son, Myron Matthews. His departure leaves enormous holes in the hearts of his wife: Mary; sons: David L. (Jill) of Illinois, Martino (Julie) of Florida, Dale (Seon) of Kentucky; daughters: Love (Keke) of Illinois, Tina of Georgia, LaDonna of Evansville; two brothers: Robert of Illinois and Ronald of Minnesota; 22 grandchildren; 26 great-grandchildren, a host of nieces, nephews, cousins, relatives, friends and the Mt. Olive Galilee Church Family.

David Lamoyne Adams, Sr. was born in Evansville, IN to David Hobart and Gladys L (Proty) Adams on January 8, 1939. He transitioned to be with the Lord at 6:00 p.m. on October 27, 2021. David was educated in the public schools of Evansville.... View Obituary & Service Information

The family of David Lamoyne Adams Sr created this Life Tributes page to make it easy to share your memories.

David Lamoyne Adams, Sr. was born in Evansville, IN to David...

Send flowers to the Adams family.