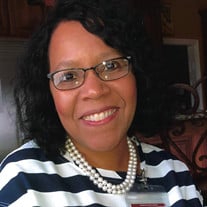 Cynthia Jeneen Coats Williams born July 27, 1966, passed peacefully on Friday, afternoon, July 12th at 2:00 pm at St. Vincent Hospital in Evansville,IN. She was surrounded by family and friends. She was a very dedicated Christian, and an ambitious and courageous young woman who cared about others. She accepted Christ at the age of 12 at the Morning Star Baptist Church in Munfordville, KY. Cindy was a graduate of Hart County High School, Henderson Community College, and Western Kentucky University where she obtained a Bachelor’s Degree. In 1984 at Western, she met and then married the love of her life, Tim Williams. They celebrated 32 years of marriage on June 6, 2019. Cindy’s all-time favorite entertainer was Michael Jackson. Cindy’s favorite vacation spot was Disney World which she looked forward to visiting every year with her family and friends. On several occasions, she visited multiple times a year. Her passion was helping both of her daughters with their cheer programs. Cindy was the daughter of the late John Henry and Mable Coats of Munfordville, KY. Cindy joined New Jerusalem Baptist Church on July 12,1987. She was the Minister of Music for New Jerusalem Baptist Church for 30+ years. At New Jerusalem Baptist Church she was a member of the Mothers’ Board,and assistant Sunday School teacher, and mentor for girls ages 12 to 18. She also served on various other committees at the church. Cindy also served on the Henderson Salvation Army Board, was the Asst. Director for ABA Cheer, Asst. Cheer Coach for Henderson County High School and North Middle School, Asst. Coordinator for Henderson County High School Student Ambassador program, and member of the Rotary Club. She previously served on the Methodist Hospital Board of Directors for 6 years. Cindy was the Public Relations Officer with the Henderson County Board of Education where she was employed for 31 years. She had a passion for the school system and watching kids excel and become productive members of the community. Cindy was preceded in death by her parents: John Henry Coats, Sr. and Mabel Madelene Coats; her brother William Crutcher Brown, and grandparents Alice Cole, Eddie Redford, Cynthia Janie Richardson Coats and Porter Coats of Munfordville, KY. She is survived by her husband; Tim Williams; her two daughters, Erin Elizabeth Faye and Mallory Lauren Williams; her Shih Tzu, Cali; her mother and father-in-law, Chip and Katie Williams of Henderson, KY. She also leaves behind a sister, Alice Elizabeth Arvie (Roy) of Horse Cave, KY, her brothers James Mitchel Brown (Malinda) , Laddie Steve Eugene Brown of Louisville, Ky; John Henry Coats, Jr. (Michelle) of Franklin, KY; brother-in-law, Laffoon Williams, Jr. of Columbus, OH. Special uncle and aunt, Leon and Jean Poindexter; dear friends; Kim and Faye Terry, Marleah James and Carrington Mason; along with a host of nieces, nephews, aunts, uncles, cousins, and a village of friends. She will be dearly missed. Visitation for Cindy will be Wednesday, July 17, 2019 from 5:00 p.m. to 8:00 pm at New Jerusalem Baptist Church located at 450 Fagan Street in Henderson KY, 42420. Funeral Services will be Thursday, July 18, 2019 at 11:00 a.m. with visitation starting at 9:30 a.m. until service time at the church. Rev. Robert L. Whitlock pastor will officiate the service. Committal and Benediction will be at Fernwood Cemetery in Henderson, KY.

Cynthia Jeneen Coats Williams born July 27, 1966, passed peacefully on Friday, afternoon, July 12th at 2:00 pm at St. Vincent Hospital in Evansville,IN. She was surrounded by family and friends. She was a very dedicated Christian, and an ambitious... View Obituary & Service Information

The family of Cynthia Williams created this Life Tributes page to make it easy to share your memories.

Send flowers to the Williams family.