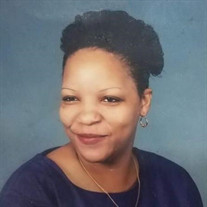 Cynthia Elaine Butler-Robinson, age 58, of Killeen, Texas took her journey to be with the Lord on Thursday, July 27, 2017. She lived a family filled loving life that began September 1, 1958 born to Marquest Butler and George Howard. Cindy was... View Obituary & Service Information

The family of Cynthia Elaine Robinson created this Life Tributes page to make it easy to share your memories.

Send flowers to the Robinson family.