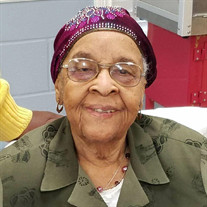 Corria Moore Mimms was born in 1914, forty-nine years after the signing of the Emancipation Proclamation. Her parents, Nick and Melrose Moore, were part of the first generation of African-Americans born free in this country. Her father moved his family from a farming area in Christian County to the more lucrative community of Earlington when Corria, her twin sister Clara, and her younger brother Walker were children. Her two older brothers, Willie and Perry, joined their father in becoming coal miners. Willie soon moved to Detroit and Perry moved to Evansville. Both had daughters, Gladys and Virginia, who became part of the Nick and Melrose household when they were little girls. Corria, Clara and Walker were all ambitious young people. Walker was the first to earn a college degree. He and his wife, Delois, moved to Louisville. Corria and Clara focused on music. Both became skilled pianists and both played for the Mt. Zion Baptist Church. Clara became an entrepreneur and operated a beauty salon in Earlington. Corria directed choirs at Mt. Zion for more than eighty years. Corria married Lester Mimms in the middle of the Great Depression. A son, Ronald, was their only child. Corria earned her bachelor’s degree from Kentucky State College and taught the fourth grade in the Earlington Public School system for thirty years. She thoroughly enjoyed her teaching career. She was devoted to each of the many students assigned to her classroom over the years. She always looked forward to school reunions when her former students returned to visit. She was an active community servant and especially devoted to her volunteer work at the Trover Clinic. Corria was certainly among God’s most chosen people. She lived 104 years – a lifetime that spanned the service of sixteen U.S. presidents. She saw the world progress from outhouses to elegant bathrooms, from no telephones to cell phones, from one-room schools to sprawling campuses, and from segregation to integration. She was a no-nonsense woman who demanded the best from herself and from those she taught in school and rehearsed in church. She had a superior work ethic and was unforgiving of those who did not. She loved her family and for years, she was the glue that held the family together. The family will struggle to stay as strong without her. In addition to her son, Ronald, her immediate family consists of her grandchildren: Roni-Marzetta, Carla, Andraya, and Derrick; her only niece, Virginia; her only nephew, Walker Jr.; and her best friend, Doris Moore.

Corria Moore Mimms was born in 1914, forty-nine years after the signing of the Emancipation Proclamation. Her parents, Nick and Melrose Moore, were part of the first generation of African-Americans born free in this country. Her father moved... View Obituary & Service Information

The family of Corria Mimms created this Life Tributes page to make it easy to share your memories.

Corria Moore Mimms was born in 1914, forty-nine years after the...

Send flowers to the Mimms family.