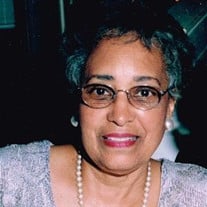 Wife and partner to her beloved George; devoted mother and grandmother to her children; a loving sister and niece; aunt and much, much more……Connie Clemmons was an inspiration to all her family and a loyal friend to a countless number of people in her life! She touched the hearts of many in her community and congregation as she tirelessly served as Church Secretary for her home church, Liberty Baptist Church. Connie was recently honored with the distinction of being recognized as a lifetime member of Liberty. A community activist and shining example of a life well lived, Connie had a true passion for community involvement. She served on various committees and volunteered within neighborhood organizations such as the Carver Community Organization, Liberty Baptist Housing Authority, Evansville Black Women’s Task Force, to name a few. Connie retired from First Presbyterian Church of Evansville where she had been the church secretary for many years. After retirement, Connie continued to serve and was recognized for her community service endeavors to the YWCA, NAACP, City of Evansville, and 100 Black Women. Born in Newark, New Jersey, Connie was the second child of Marie and Everett Terry. Growing up in the suburbs of New Jersey, she and her brother Everett learned the meaning of family values at an early age. With an always present positive attitude, she later in life accepted the challenge to pursue her formal education and did so with confidence and enthusiasm when she began her studies at Hampton Institute in Hampton, Virginia. While pursuing her studies at Hampton, Connie met her future husband George Clemmons. In later years, George proposed and brought his new bride and her son Robert home to Evansville, Indiana. They began their new adventure of marriage and raising their family. Motherhood agreed with Connie as she and George raised Bob and prepared for the next adventure, their daughter Robin. Soon after Robin arrived, the family was blessed again with the addition of their baby girl April! Connie embraced her roles and responsibilities in the home and community. She was an example of love, pride and humility as she supported her husband’s dream of growing the family business, “Club Paradise”, while raising a model family of which she was very proud. Today we mourn her passing but we salute her life well lived. Connie was preceded in death by her daughter April M. Hughes and grandson Eric Sanabria. She is survived by her devoted husband of 62 years, George Clemmons; Son: Robert Terry (Carliss); Daughter: Robin Clemmons; Special Grandson: Marques Terry (Stephanie), Granddaughter: Jasmine Terry; Grandson: Richard Sanabria, Jr. (Nancy); Great-Grandchildren: Marques, Denerio, Brianna, Myles, and Madison.

Wife and partner to her beloved George; devoted mother and grandmother to her children; a loving sister and niece; aunt and much, much more&#8230;&#8230;Connie Clemmons was an inspiration to all her family and a loyal friend to a countless number... View Obituary & Service Information

The family of Constance Marie Clemmons created this Life Tributes page to make it easy to share your memories.

Wife and partner to her beloved George; devoted mother and grandmother...

Send flowers to the Clemmons family.