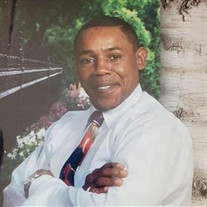 Clifford “Cliff” Eugene Jay was born October 6, 1953, to the late Arthur Jay and Vera Johnson. He departed his earthly home for his eternal home on October 19, 2021, surrounded by loved ones. Clifford was a member of the Mt. Zion Missionary Baptist Church and was a former choir member. He had a beautiful tenor voice, and his favorite song was “The Blood,” which he would often sing impromptu. Cliff attended Earlington High School, received his GED in San Marcos, Texas, and was a student at the Hopkinsville College of the Bible. He was an Air Force veteran serving during the Vietnam War and still carried himself with that military bearing. He often strutted around town, and many have commented on how they have missed seeing him walking. Cliff served as former Chaplain of the Earlington VFW Post 2 for many years and sang at the Memorial Day Service. Clifford was a gentle man who never met a stranger and would give you the shirt off his back. He loved his family and wanted his money to help anyone in the family and others who had a need. He loved to read and write, draw, garden and fish and was a student of Jiu-Jitsu and Karate. Clifford also loved to talk, so much so that we often laughed because we often would tune him out, and he would still be talking. Clifford worked for TVA, Gemtron, and the Hopkins County School system as a classroom aid. He helped with the Boys to Gentlemen Club at Browning Springs Middle School. He would often be out and hear someone yell “Mr. C.J.,” and it would be one of his former students. They would also drop by to see him from time to time at his home. Cliff also would let folks who were down and out crash at his house. He also worked with Cliff & Shirley Hedges for many years, assisting them with their foster children and often going on vacations with them. In addition to his dad, Cliff was preceded in death by his grandparents, Corene and Leroy Johnson and Virginia Sanders. Cliff is survived by his mother: Vera Johnson, Earlington, KY; sons: Terrell (Lynnetta) Jay, Swansea, IL; Bobby Madison of Belleville, IL; Adrian Jay of Seattle, WA; and Dewayne Jay of Earlington, KY; brothers: Durand Jay and Stanley Jay of Earlington, KY; Marshall Jay, Louisville, KY; Tony (Sherdina) Foster, Columbus, OH; Dana (Dana) Johnson, Madisonville, KY and Steven Johnson of Jacksonville, Fl.; sisters: Katrina (Kerry) Scott and Sherri Foster, Madisonville, KY; Yolanda Robinson, Spartanburg, SC; Monica Johnson, Earlington, KY; and Sandra (Mark) McFarland, Owensboro, KY; uncles: Leroy Johnson and Lewis (Cleola) Johnson, Columbus, GA; Earnest Jay, Jr. of Goose Creek, SC; aunts: Darlene (Nate) Jones, Louisville, KY; grandchildren: Mitchell, Olivia, Anndyliah, Daesja, Darius, and Kenny; one great-grandchild: Tailyn; and a host of nieces, nephews, cousins and friends, all of whom he loved dearly.

Clifford &#8220;Cliff&#8221; Eugene Jay was born October 6, 1953, to the late Arthur Jay and Vera Johnson. He departed his earthly home for his eternal home on October 19, 2021, surrounded by loved ones. Clifford was a member of the Mt.... View Obituary & Service Information

The family of Clifford Eugene Jay created this Life Tributes page to make it easy to share your memories.

Send flowers to the Jay family.