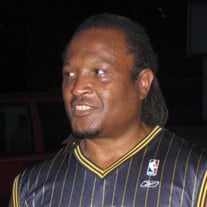 Claude "Claudie" Bernard Crenshaw was born on January 28, 1964 to Ms. Queenie Finch (Crenshaw) and Claude Warfield Jr. in Evansville, IN. Claudie was the 7th son of nine boys born to Ms. Queenie Finch. After graduating from F.J. Reitz High School he went on to learn a skilled trade and become an Industrial Machine Operator. He was employed by Hoosier Stamping, Lewis Bakery and American Glass Windows. In his leisure time he enjoyed spending time at the river. On January 26, 2020 God saw His child's need to rest and be relieved of physical pain. God’s mercy and grace allowed him to depart this earthly life at the tender age of 55. He was at his home, surrounded and comforted by loved ones. He was preceded in death by his father and a brother, Carl (Shoestring) Crenshaw. Claudie leaves behind, his mother Queenie Finch (Crenshaw) of Evansville; one son, Tavin Crenshaw of Evansville; nine brothers, Bobby (Mary) Crenshaw of Edgefield, South Carolina; George Crenshaw of Evansville; Chauncey Crenshaw of Phoenix, Arizona; James (Melissa) Crenshaw of Evansville; Timothy Warfield of Evansville; John Finch Jr and Douglas Finch of Livermore, California; Jason Warfield and Kenny Rhodes of Evansville; five sisters; Marlene Crenshaw, Jennifer Bauer, Joanna Bauer and Rachele Suggs, all of Evansville, and Tamika Warfield of Henderson, Kentucky; seven grandchildren; Teauna Crenshaw, Zariah Hardiman, La'Kenia Crenshaw, Tae'Aubry Crenshaw, Malaya Crenshaw, Tailyn Crenshaw and Ava Crenshaw, all of Evansville; two Uncles, Carl Crenshaw of Indianapolis, and Douglas Crenshaw of Evansville; a host of niece's, nephew's, cousins and friends. Claudie also leaves behind a long time companion, Robin Hamilton, and a long time friend Mike Miller, both of Evansville. Our brother Claudie is no longer with us in the flesh, but he will always be a part of all of us. His time with us has been cut short, but we can all be thankful that when he came to understand his condition, he openly professed his belief in and acceptance of Jesus Christ as his savior. His spirit is now free of the burdens of this world and is resting in God's grace. John 3:16 For God so loved the world, that he gave his only begotten son, that whosoever believeth in Him should not perish, but have everlasting life. Acknowledgements: The Crenshaw Family wishes to extend a heart-filled, Thank You to everyone for their prayers, cards, calls and other acts of kindness. Private services will be held at a later date.

The family of Claude "Claudie" Crenshaw created this Life Tributes page to make it easy to share your memories.

Send flowers to the Crenshaw family.