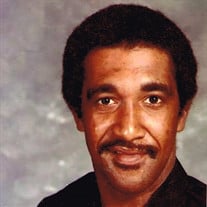 Christopher “Brother” Columbus Stewart, was born in Mt. Vernon, Indiana on August 6, 1950 to Rowena C. (Robinson) Stewart and Christie Stewart. He went home to glory from the Mt. Vernon Nursing & Rehabilitation Center, in the arms of his sister and oldest niece, at the age of 65. Christopher joined Zion Missionary Baptist Church in Evansville IN at the age of five, under the leadership of Rev. Dr. John M. Caldwell. Christopher spent time learning and helping out in Rev. Caldwell’s church print shop. He, along with his family, was a constant presence at Zion. He was a member of the youth choir and many other youth organizations of the church. Christopher was a 1969 graduate of Central High School. During his high school years, he was very active in the following sports: Track, Cross Country, and Junior Varsity Basketball. He was drafted into the army in 1970, did a tour of duty in Viet Nam, and was honorably discharged. Christopher attended Vincennes University in the 1970’s. He worked for the City of Gary as a firefighter and retired on disability. Christopher loved sports and history and was able to easily recall and provide statistics and knowledge on both subjects. He also had excellent navigating skills and could provide directions for those traveling. He was very proud of his service to his country in the United States Army. Christopher married Constance Vaught and they have one son Kareen C. Stewart and one granddaughter Shanice Day, whom he lovingly called "Red." Christopher was a supportive father, who would sacrifice his own well-being for his son and granddaughter. He was a doting uncle and great uncle of his sister’s children and grandchildren. He took part in the rearing of two of her grandchildren who he lovingly called Jake and Seal. He fondly gave all of his sister’s grandchildren nicknames. He aided his mother during her illness. He attended to the needs of his father during his mother’s illness and after her death, and lovingly continued until his father’s passing three months later. During his early retirement, Christopher was willing to give of his time transporting church members and friends to church and to run errands as well as a friend’s child to and from school. He loved to tease his sister. He would say “. . . because it is so easy.” Yet he advised her to take care of herself (over others). He was preceded in death by his mother, father, and brother-in-law, Ronald William Glass. He leaves to mourn him, his son, Kareen Stewart; granddaughter, Shanice Day of Oak Park Illinois and Alabama A&M University; sister, Jacqueline Stewart Glass of Evansville IN; nephew, Ronald C. A. (Carolina Guzman-Glass) Glass of Boca Raton FL; his especially attentive niece and caretaker, Suzanne Glass-Foster of Henderson KY; niece, Janelle R. Glass of Evansville IN; nephew, Nicholas Glass (wife, Sarah Rejoice Brown) of Essex Junction VT; great nephew and nieces: Clyde Jacob A. Foster of Louisville KY and Cecilia Foster of Henderson KY, Jasmine, Jonathan, and Joshua Guzman-Glass of Boca Raton FL, and Aðalbjört Brown-Glass of Essex Junction VT; aunts: Virginia Pitts and Margaret Robinson of Evansville IN; Elise Robinson of Henderson KY; an uncle, William (Queenetta) Robinson of Louisville KY; a God-sister, Apryll Rankin of Evansville IN; his former wife, Constance Vaught Stewart and the Vaught and Williams family; many cousins, friends, and those whose heart he touched and who came to love him dearly at the Mount Vernon Nursing and Rehabilitation Center and Heart to Heart Hospice. Services will be held Saturday, April 2, 2016 at 11:00am at Zion Missionary Baptist Church, 1800 S. Governor Street, Evansville IN. Rev. R.V. Terry, Jr. officiating. Visitation will be Friday from 5:00pm – 7:00pm at the church and again Saturday from 9:00am until service time. Burial in Sunset Memorial Park. Mason Brothers Memorial Chapel is in charge. Condolences may be left at www.masonbrothersfuneralservices.com

The family of Christopher Columbus Stewart created this Life Tributes page to make it easy to share your memories.

Send flowers to the Stewart family.