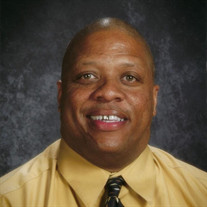 Charles Marvin Gant, 59, son of the late James Ezra Gant and Mary Fairrow Gant, transitioned to his heavenly home on March 19, 2019 at 12:25 a.m. after succumbing to a lengthy battle with cancer. He was surrounded by his loving family. Charles was known by some as Franchise and others as Bossman, CG, OG, and Coach. He was also fondly known as Orangie. Charles graduated from Wabash College in 1982 and went on to attend the University of Louisville Law School for two years. After deciding that Law was not the career for him, he matriculated at Murray State University to pursue his teaching certificate. He later received his Masters in Education. For over 20 years, Charles was an integral part of the Hopkins County School System serving in many capacities ranging from teacher, coach, Assistant Principal, Principal, and in 2016 he was named the Assistant Superintendent of the Hopkins County Board of Education. Charles’ enthusiasm, positive attitude, and love for the children of the Madisonville Community will not be forgotten. Charles has touched may lives on his journey, often ending his many speeches by saying “I will leave behind a monument that the hands of time cannot erase.” Charles leaves to cherish his memory, his wife of 24 years: Sharon Gant; 2 brothers: Tony G. Elliott, James Gant, Jr.; 5 sisters: Ophelia Slaton, Tuwanna Dunston (Timothy), Lillie Moore (Larry), Helen Gant, Linda Moss (Greg); a host of nieces, nephews, aunts, uncles, cousins and many loved and devoted friends. Services are 1:00 p.m. Saturday March 23, 2019 at Victory Church with visitation from 10:00 a.m. until service. Burial will be in Westside Odd Fellows Cemetery. Arrangements are entrusted to Mason & Sons Funeral Home. Leave condolences at www.masonbrothersfs.com.

Charles Marvin Gant, 59, son of the late James Ezra Gant and Mary Fairrow Gant, transitioned to his heavenly home on March 19, 2019 at 12:25 a.m. after succumbing to a lengthy battle with cancer. He was surrounded by his loving family. Charles... View Obituary & Service Information

The family of Charles M. Gant created this Life Tributes page to make it easy to share your memories.

Send flowers to the Gant family.