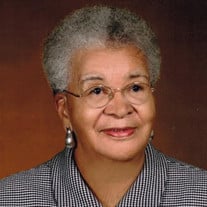 Mrs. Catherine Coleman, the only child of the late Barthonia and Naomi Couch, was born June 25, 1927 in Slaughters, Kentucky. The family later migrated to Evansville, Indiana where Catherine attended Evansville Public Schools and graduated from Lincoln High School in 1945. Catherine was united in matrimony to John Coleman and this union was blessed with four children. Daughters, Rita Diane Coleman Roberts and Annese Elaine Coleman Burruss both preceded her in death. She was also preceded in death by her eldest grandchild, Kenneth Dewayne Roberts. At an early age, Catherine professed her faith in Jesus Christ and joined Liberty Baptist Church. She remained a member of Liberty Baptist Church for 14 years. She later moved her membership to the Nazarene Missionary Baptist Church, where she served faithfully until her health failed. Mother Coleman, as she was affectionately known by many at Nazarene, served as a member of the Senior Missions, Circle of Faith, Greeter’s, Mother’s Board, Kitchen Committee, and the Senior Choir. She was also a faithful member of the Rock of Ages Sunday School Class and the Wednesday morning bible study class where she engaged in an in-depth study of the principles of God’s Word. Indeed, she loved to study the Word of God and openly discuss His Word with those she encountered. Catherine was employed as a maid for many years. However, aspiring for a better life for herself and her children, she later joined George Koch & Sons where she was a dedicated and faithful employee for 33 years. After retiring, she busied herself with being a foster grandparent with CAPE for 14 years. She was often known to fill her days with walking to most destinations in Evansville as well as staying abreast of the latest Evansville news and gossip. Catherine departed this earthly life on Wednesday, July 13, 2016 at the age of 89 years and 18 days. While she was known to be both opinionated and outspoken, she was also very compassionate and loving. She leaves to cherish her memory her son, Michael D. Coleman, Sr. (Maxine) of Evansville, IN; her daughter, Sharon P. Hite (Daniel) and son-in-law, James E. Roberts (Rita-deceased), all of Indianapolis, IN; aunt, Pauline Cook; nine grandchildren, 30 great grandchildren, many great-great grandchildren, and one great-great-great grandchild; a host of cousins, other family members and friends. Catherine was certainly one of a kind. She was loved by many and will be missed by all who knew her. The family wishes to offer our deepest gratitude to the Deaconess VNA/Hospice for their dedicated and compassionate care during Catherine’s time of illness. Services will be held Saturday, July 23, 2016 at 11:00am at Nazarene Missionary Baptist Church with same day visitation from 9:00am until service time, also at the church. Burial in Oak Hill Cemetery.

The family of Catherine Couch Coleman created this Life Tributes page to make it easy to share your memories.

Mrs. Catherine Coleman, the only child of the late Barthonia...

Send flowers to the Coleman family.