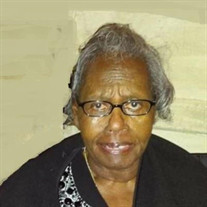 Carrie Lee (Smith) Boyd Stafford was born on July 26, 1922, in the Memphis, Tenn., area. A baby of the World War I era, Carrie was one of several children of her mother Essie Mae Smith and father Ernest Smith. Her three brothers preceded her in death: Willie James Smith (Martha); Frank Smith (Essie, deceased); and Jesse Smith (Eula, deceased). In Carrie’s early years, her parents moved the family from Tennessee to Kentucky, where she would spend the majority of her 98 years of life. Carrie married at 16, to her first husband, Alexander Boyd (who preceded her in death in 1952). The young couple married in Kentucky, and of this union came much posterity: daughter Phyllis, deceased, (Alphonso Scott, deceased) and grandchildren Dwight (Taya) of Tyrone, Ga., and Lee (Sonja) of St. Louis, Mo.; daughter Eva May (Walter Pugh, deceased) of Detroit, Mich., and grandchildren Cheryl Evans of Irving, Texas, and Lt. Col. Allen Troy Boyd Sr., USA, Ret. (Donna) of Desoto, Texas; and spiritual granddaughters Sandra Stephenson of Detroit., Vickey Thompson of Fayetteville, Ga.; son Clarence Alexander “Buddy” (Gwendolyn “Diane”) of Oxford, Ga., and grandchildren Kenneth, of Nashville, Tenn., Charmion (Leonard Mattison) of Detroit, Ericka Hulbert of Detroit, Tanisha of Mobile, Ala., Delissia “Nikki” of Detroit, and Tiffany Hill of Covington, Ga.; daughter Joyce Ann (John Bourne, deceased) of Middle Island, N.Y., and grandchildren Curry (Leslie), of Hempstead, N.Y., and Sean, of Phoenix, Ariz.; daughter Ruby Pearl (Forrest Scisney) of Las Vegas, Nev., and grandchildren NaTasha Barnes of Detroit, Yvonne Scisney of Kenosha, Wis., Paul Scisney (Amanda) of Norcross, Ga., Tonja Scisney of Bremerton, Wash., and Forrest Scisney II; son James Henry (Stephanie) and grandchildren Cheryl, Steven of Mobile, Ala., and Bonita of Detroit. Also left to remember Carrie are her caregiver and spiritual daughter Barbara Williams of St. Louis, Mo., and her caregiver and spiritual granddaughter Mary Jane Yancey of Nortonville, Ky.; and a host of great-grandchildren, great-great grandchildren, other relatives and friends. While in the first half of the 20th century the mindset of many was that the woman’s place was in the home—raising the children, cooking and doing household chores, Carrie proved otherwise. During World War II and well into the 1950s, she held several jobs outside of being homemaker at the Boyd residence. Carrie worked in janitorial services at the Fox Lumber Company in Nortonville, Ky. Later, she trekked to other folks’ homes, working as a housekeeper in Madisonville and Crawfton, Ky. She also was a caregiver to senior adults in nearby Dawson Springs and was a cook at a saloon in Mannington in Christian County. A devoted believer, she accepted Christ as her Lord and Savior at 13. She was active in the church her entire life. At the time of her death she had been the longest-living servant of the Lively Stone Church of God in Nortonville, Ky., at which she was one of the church’s original founders. Working with the late Bishop Phillip Scott of Lively Stone Church of God in St. Louis, Carrie and others started services in neighborhood homes in Nortonville. Later, they moved the services to Nortonville Elementary School before building a sanctuary atop an old coal mine. After that structure sunk the congregation built a new church building that stands today and houses the present-day sanctuary. As a missionary, who also preached at that new, small “church on the hill,” Carrie was a part of the prayer band. She also led many youth members in their quest to receive the Holy Spirit and accept Christ in their lives. As a faithful servant her work at Lively Stone helped the church and the surrounding Nortonville community grow, including leading fundraising efforts that paid for the remodeling of the sanctuary; the bricking of the church; the building of the education wing; and the placing of stones on the hillside of the church. She also made and sold quilts to support the church’s annual meetings. As if that was not enough, she was also a Sunday School teacher. In 1966, Carrie found her second love; she married Willie Stafford in Kentucky. Of this union, Carrie’s surviving stepchildren include Ada Stafford (James Smith) of Louisville, Ky.; Carolyn Stafford (Richard Louden); Margaret Stafford (George Floyd); Raymond (Carolyn, deceased); daughter-in-law Loretta (wife of the late Jewell Stafford). Preceding Carrie and Willie in death were four sons: Daymond, Donald, Phillip and Junior, and daughter Helen Marie. After Willie died, Carrie divided her time between her adult children in St. Louis, New York, Detroit and Las Vegas. Living on earth to nearly 100 is a feat most people never accomplish. Thus, there is so much to remember—over so many years—about Carrie Lee Smith Boyd Stafford. Anyone who knew Carrie knew she not only loved the Lord, she also enjoyed baking; embroidery; quilting; singing; and yes, reading the bible. And she never let a moment at the ironing board go by without singing some good ol’ spirituals. Her children will remember her for the little things she did with them as a doting mother, including jumping rope and playing horseshoes. Most of all it will be the love she shared with all that made her acquaintance, whether family or friend. Though she died on Sept. 19, 2020, in Las Vegas, Carrie will remain alive in everyone’s hearts and minds because her spirit, just like the morning sun that rises each and every day, will forever shine. —Obituary written by spiritual grandson Rick Blalock of Alpharetta, Ga.

Carrie Lee (Smith) Boyd Stafford was born on July 26, 1922, in the Memphis, Tenn., area. A baby of the World War I era, Carrie was one of several children of her mother Essie Mae Smith and father Ernest Smith. Her three brothers preceded her... View Obituary & Service Information

The family of Carrie Lee Stafford created this Life Tributes page to make it easy to share your memories.

Send flowers to the Stafford family.