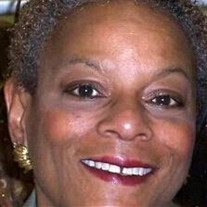 Beverly Denise Leavell of Evansville, Indiana transitioned to be with the Lord on Saturday September 23, 2017 at St. Vincent Hospital. Beverly was born September 19, 1956 to Eddie and Marybelle Leavell both which preceded her in death. Beverly graduated from Benjamin Bosse High School and went on to attend the University of Southern Indiana. She spent a year serving in the Army Reserves before joining the workforce. She worked as an underground coal miner for Amax Coal Company for 19 years and at the time of her passing she worked as a mutual clerk at Ellis Park Racing where she had almost 10 years of service. McFarland Baptist Church was Beverly’s church home for many years but most recently attended Church of the Harvest with her daughter and grandchildren. Beverly was lovingly called by many names. Whether she was called Neecie, Velvet, BV or Memaw, she was loved by us all! Beverly enjoyed working crossword puzzles, playing solitary and Words with riend’s games. She also loved singing and dancing to “ole school” music, playing cards and spending time with her friends. Beverly leaves, to cherish her memories, daughter Nakia Leavell-Middlebrooks of Evansville, IN, son David (Shamiah) McGuire of Chicago, IL, her special Godson Omar Jones of Indianapolis, IN and four grandchildren, Taelyn Byers(Tater bug), A ’Jayden Ware(Jenka), Darrel Middlebrooks II (Degums)and David McGuire III (stinka-man). Also three beautiful sisters Yvonne Stewart of Evansville, IN, Deborah (James) Wagner of Evansville, IN and Gloria (Jeffery) Simon of Oceanside, CA. She will be missed by a host of nieces, nephews, close cousins and friends both near and far.

Beverly Denise Leavell of Evansville, Indiana transitioned to be with the Lord on Saturday September 23, 2017 at St. Vincent Hospital. Beverly was born September 19, 1956 to Eddie and Marybelle Leavell both which preceded her in death. Beverly... View Obituary & Service Information

The family of Beverly Denise Leavell created this Life Tributes page to make it easy to share your memories.

Send flowers to the Leavell family.