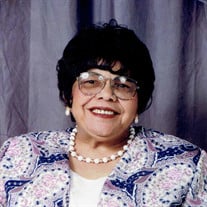 Betty Mae Brewer Majors Johnson entered into eternal rest on Tuesday, February 2, 2016 at her home. Betty was born on May 5, 1931 in Cheatham County, Tennessee to Rebecca Elam Brewer and Andrew Brewer. She was the sixth of seven children.... View Obituary & Service Information

The family of Betty Mae Johnson created this Life Tributes page to make it easy to share your memories.