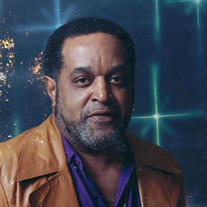 Arthur Clyde Johnson was born to Arthur Tab Johnson and Dora Spencer on February 26, 1943. He was the third of 3 children. Arthur was born in Louisville, KY. He attended Highland Park Elementary, Jackson Junior High, and Central High Schools in Louisville up to his junior year before moving to Evansville and enrolling in Lincoln Clark Douglass for his senior year where he continued to excel at sports, especially Track and Field. He tied century time in 1961 running a 10.1 in the 100. He graduated in 1961. In 1962, he went into the U.S. Army and was stationed in Germany. Arthur could fluently read and speak German. As a child, Art developed a passion for horses. He was known as Art of Shine at Churchill Downs. He was a legendary staple there and at Ellis Park. He worked for the railroad and Alcoa, but his love was shining shoes. Arthur wrote and had a book published titled, “Shine Man”. He was a loving father, grandfather, brother, uncle, and friend to many. He was preceded in death by his father, Arthur Tabb; stepfather, Jim Cargile; and mother, Dora Cargile. He leaves to cherish and mourn his memory: sisters, Barbara Mitchell and Rev. Dr. Martha E. Granger; children: Arthur, Bruce, Helen, Delana, Kim, Kaye, and Clyde; grandchildren; and a special friend, Georgia Frye.

The family of Arthur Clyde Johnson created this Life Tributes page to make it easy to share your memories.