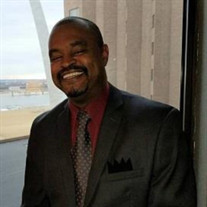 Anthony Jerome Carter “Boe” , 50, was called home to Glory comforted in the arms of his loving wife on Dec. 3, 2020 at 2:07 p.m. at St. Luke’s Hospital in Chesterfield, MO. He was born to Ralph Edward Carter and Linda Kaye Boyd on February 2, 1970 in Evansville, IN. He was baptized at an early age at Zion Baptist Church under Rev. John Caldwell and by letter of Christian Experience transferred his fellowship to Nazarene Baptist Church under Rev. Larry Rascoe, Sr. Anthony’s love for sports became apparent during Elementary School where he played basketball winning local championships and MVP awards. He graduated from Benjamin Bosse High School in 1988. There, his passion for football developed under the coaching of Mike Madriaga. Anthony’s unique style and spectacular playing ability on the field was compared to that of Boe Jackson of the LA Raiders. After graduation from high school, Anthony attended Waldorf University in Forest City, Iowa receiving his Associate Degree in Psychology. He then signed a letter of intent for a full scholarship to Southeast Missiouri State University (SEMO) located in Cape Girardeau, MO where he received his Bachelor’s and Master’s Degrees. While at SEMO, Anthony pledged Alpha Phi Alpha Fraternity and was the anchor for 7 linemen. Anthony met Camisha Johnson in college and together, they had a daughter Christian whom he loved and adored. He later met and married Rhonda Carter and to this union the “ Carter Boys” Asontay and Alijah were born. They were the joy of his life. He became step-father to Micha Pullom. In the Spring of 2019, Anthony married Karen Nichols Carter. She gave him the best years of his life. Anthony worked as a Psychologist for several years but after careful consideration, he changed the course of his career and began employment in retail management. Throughout his career in the St. Louis area, he managed a Foot Locker, Quick Trip, DXL, and was currently the manager of Car Max . Anthony also coached youth basketball and was known as “Coach Carter’. Anthony made sure that his living was not in vain. He was a 5-time renewal organ donor and upon his death, he saved the lives of 2 people who were on the transplant list. He was given the Honor Walk through the halls of St. Luke’s Hospital accompanied by his loving wife, Karen. Anthony is preceded in death by his sister: LaShell Nicole Price; step-father: Larry Allen Price; uncle: Henry Jones; grandparents: Ruby Miles Lester, James Ferguson, Mary Eliza Carter, Clarence Dowell, Sr., Mr. & Mrs. James Price. Anthony leaves to cherish his amazing memory, his wife: Karen Carter; daughter: Chistian (Lance) Evans of Chicago, IL; sons: Asontay and Alizah Carter of St. Louis, step-daughter: Micha Pullom; mother: Linda Kaye Boyd of Evansville; father: Ralph Edward Carter of Owensboro, KY; brothers: Tori Allen Price of Evansville who he loved dearly, Dartonian Winstead of Owensboro, KY; sisters: Voletta Burroughs, Marilyn Hagan, April Olinger, Jerryta Green all of Owensboro, KY; aunties: Anna Gray, Donita Ferguson, Chan Miles, Scherilla Price all of Evansville, IN, Inez Jones of Lorain, OH; uncles: Orlando Jones of Lorain , OH, James Tag Kemp, Steven Miles both of Evansville, IN, great uncle: Larry (Lisa) Miles of St. Louis, MO; a host of loving cousins who would do anything for him and travel the world for him.

The family of Anthony Jerome Carter created this Life Tributes page to make it easy to share your memories.

Send flowers to the Carter family.