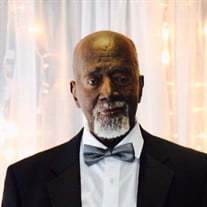 Rev. Dr. Anthony Marquis Brooks, Sr. began his remarkable life’s journey on October 20,1934 in Henderson, KY. Surrounded by his family, the Master called him home on Sunday, September 20, 2020 with the words we all long to hear one day, “Servant, well done.” Rev. Dr. Brooks served as the pastor of three churches during his esteemed ministerial career. He served at Webster Baptist Street in Sebree, KY from 1956 to 1958. He then served at Dove Chapel Baptist Church in Evansville, IN from 1958 to 1978. His third and final call to pastor came from the Seventh Street Baptist Church in Henderson, KY where he served from 1967 until his passing. His love for the Seventh Street church family was unmatched, and his congregation loved him and First Lady Alice Brooks deeply. In addition to serving in his church, he also was actively involved in the National Baptist Convention of America, Inc. and was a lecturer for the General Association of Baptists in Kentucky. He served as a ‘father in the ministry’ to numerous ministers whose ministries are active across the country today. Rev. Dr. Brooks lived his faith in both his private and public lives. His first commitment was to God followed closely by his commitment to his family. He met his future wife and lifetime love, Alice Rebecca West, when her father became the pastor of Seventh Street. After a courtship of two years, the two were married in 1956. To this union of love, four children were born. Along with serving as pastor, being with his family was the highlight of his life. Alice was not just his wife, but his best friend--spending countless hours together traveling, playing games, and attending the events of their family and church members. Anthony was the living example of a family patriarch, affectionately called ‘Daddy’ by his children, and ‘Papa’ by all of his grandchildren and great-grandchildren. He loved to tell stories to his grandchildren and great-grandchildren, and they were always a captive audience, listening to every word. His family was truly the joy of his life. Education was an important value in Rev. Dr. Brooks’ life, and he expressed this throughout his life to his family and community. He graduated from Douglass High School in Henderson and initially attended Kentucky State University. He ultimately earned his Bachelor of Arts and Master of Arts degrees in Education from the University of Evansville and his Doctorate in Education from Indiana University. While at the University of Evansville, Anthony was a founding member and inaugural Polemarch of the Episilon Iota Chapter of Kappa Alpha Psi Fraternity, Incorporated. He was also the first African American student to play on the university’s collegiate tennis team. After completing his own education, Dr. Brooks shared his belief in the power of getting an education with the students and families he served. He worked as an educator for many decades in the Evansville Vanderburgh School Corporation, serving as a teacher in EVSC, a principal at Stanley Hall, Harper, Lincoln, and Christa McAuliffe. He was eventually promoted to be one of the first African Americans to serve in the Administrative Offices of EVSC. Living out the words of James 2:14-16, Rev. Dr. Brooks served as a lifelong leader in his community, most notably, advocating for the civil rights of the African American community in both Henderson, KY and Evansville, IN. During his life, he served as the president of both the Henderson and Evansville chapters of the National Association for the Advancement of Colored People (NAACP) as well as the vice president of the Kentucky NAACP state organization during the 1960s. Specifically, his civil rights advocacy in Henderson, led to his arrest multiple times as he led sit-ins at local restaurants, Ferrell Brothers and Ken’s Corner Cafe. During this time, he also marched in protests against segregation with Dr. Martin Luther King, Jr. in both Louisville and Frankfort. Later in his career, he also served on the Evansville Human Rights Commission and the City of Evansville Public Works Board. Preceding him in death were his beloved wife, Alice; his dear mother, Elsie Brooks; Robert Brooks and Millie Hancock, who shared in raising him; and siblings, Clara Jean Williams, Robert Brooks, Jr. and Larry Brooks. After a life very well lived, Rev. Dr. Brooks transitioned peacefully on Sunday morning, September 20, 2020. Left to cherish his memory and continue his legacy are his four children, Anthony M. Brooks, Jr. (Pamela), Tijuanna M. Tolliver (Steven), Adrian M. Brooks I (Terry), and Lynel A. Beaty (Timothy, Sr.); eight grandchildren, sixteen great-grandchildren. His siblings, Rose Ware and Sharron Brooks and his in-laws, Genel Gibbons, Nadine D’Abreu, Shernon (Jodi) West, Helena West, and Katrina Walker; along with a very special niece, Deborah Smith (Dewayne). Services are 11:00 a.m. Saturday September 26, 2020 at Memorial Baptist Church with visitation from 9:30 a.m. until service time. Rev. Dr. Brooks will lie in state at Seventh Street Baptist Church in Henderson, KY on Thursday September 24, 2020 from 12-7:00 p.m. and again on Friday September 25,2020 from 4-7:00 p.m. Entombment at Fairmont Cemetery Mausoleum. R. Mason Brothers Memorial Chapel is entrusted with arrangements. Leave condolences at www.masonbrothersfs.com. Donations may be made to the Adrian M. Brooks Foundation DBA: Anthony & Alice Brooks Scholarship Fund at A.M.B Foundation, attention: treasurer 645 Canal Street, Evansville, IN 47713. A mask is required to attend all services.

Rev. Dr. Anthony Marquis Brooks, Sr. began his remarkable life&#8217;s journey on October 20,1934 in Henderson, KY. Surrounded by his family, the Master called him home on Sunday, September 20, 2020 with the words we all long to hear one day,... View Obituary & Service Information

The family of Rev. Dr. Anthony Marquis Brooks, Sr. created this Life Tributes page to make it easy to share your memories.

Send flowers to the Brooks family.