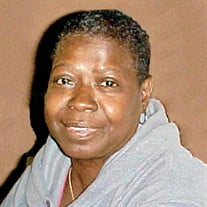 Allie Doretha “Rita” Steveson, age 65, went to be with the Lord, her mother, her father, and son Kelly on Friday, July 15, 2016. She was preceded in death by her husband, Craig Steveson. Allie was born October 17, 1950 to the late Elma Brown and Jeffrey Kelly. She was a graduate of Bosse High School and worked at AmeriQual and Mead Johnson Nutritionals. Allie grew up in New Hope Missionary Baptist Church and later joined Memorial Baptist Church. She was a very compassionate and giving person. Allie had such a sense of humor. You never knew what was going to come out of her mouth. Although she was close with all of her children, she had a special bond with her only daughter. Allie is lovingly survived by her daughter, Tonya Wickware of Nashville TN; her sons: Ben Wickware of Evansville IN; her sister, Gwendolyn Kelly Lewis of Evansville IN; her brothers: David Brown (Susan) of San Jose CA, John Brown (Diane) of Evansville IN, Kerry Brown (Maria) of Phoenix AZ, and Victor Brown (Zina) of Houston TX; several grandchildren, great-grandchildren, nieces, nephews, cousins, and friends. Services will be held Friday, July 22, 2016 at 1:30pm at Mason Brothers Memorial Chapel, 1001 Lincoln Avenue, Evansville IN with visitation from 11:30 am until service time. Burial in Oak Hill Cemetery.

The family of Allie Doretha Steveson created this Life Tributes page to make it easy to share your memories.

Send flowers to the Steveson family.