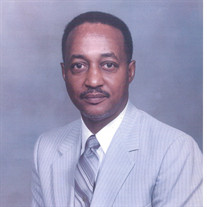 Allen E. Martin, 75, of Madisonville KY, transitioned from earth to glory on Wednesday, January 3, 2018. To family and friends he was known as “Butch.” He was born in Hopkins County Kentucky on March 2, 1942, to the late Lawrence E. Martin, Sr. and Nettie Belle Hall Martin. Allen confessed his faith in Christ at an early age and joined Mt. Zion Missionary Baptist Church in Earlington KY. Following graduation from J.W. Million High School in Earlington he joined the United States Air Force. Upon completion of his military service he and his wife (of forty-seven years), Minnie Hines Martin, moved to Indianapolis IN where he was employed by Ford Motor Co. During these years he was a faithful member of the Shiloh Missionary Baptist Church where he served as deacon, trustee, Christian Education Director, Male Chorus Director, Sunday School teacher, Helping Hands Ministry worker, and wherever else he saw a need. On May 30, 2011, Butch returned to Madisonville for his aunt’s birthday party and renewed his childhood romance with Helen Keith Tinsley. On November 16 of that same year, they were united in matrimony. For the next six years they enjoyed traveling, dancing, and playing electronic games. But most of all they just enjoyed being together. They were often affectionately teased about being on a continual honeymoon. Butch was an avid sportsman who took pleasure in fishing and rabbit hunting when he could find the time. He also enjoyed watching basketball. Whenever traveling, he would rather drive than fly because he took delight in the beautiful scenery. Allen reunited with the Mt. Zion Missionary Baptist Church and served faithfully, until illness prevented it, as Chairman of Deacons, Choir member, and Sunday School teacher. His favorite song to sing during Sunday morning devotional was “I Love to Praise Him!” It wasn’t just a song he loved to sing, it was his testimony of love for The LORD. Allen was preceded in death by first wife Minnie Hines Martin; a brother: Lawrence E. Martin, Jr. He will be remembered as a godly, loving, and patient man of wisdom by his devoted wife, Helen K. Martin; two stepsons Michael R.Tinsley and Terry F.Tinsley (Lisa) of Lexington KY; one daughter Renee’ A. Martin Collins (Tony) and granddaughter Samira I. Martin of Indianapolis IN; granddaughter Sierra M. Martin of Madisonville KY; his mother, Nettie B. Gray of Earlington KY; three brothers Clarence L. Gray, Jr. (Diann) of Madisonville KY, Audry Martin (Vanessa) of Atlanta GA, and Edward Martin of Louisville KY; five sisters Lynette H. Burns and Judy Anderson of Earlington KY, Loris F. Gray, Angela Martin, and Denise Martin-DeLaPaz of Madisonville KY. We remember “Butch” today not as mourners devoid of hope, but as persons thanking God for the witness of his well-lived saved and godly life. He never met a stranger and to know him was to love him. We will miss him on these shores, but we who know Jesus as our personal savior, have the blessed assurance of seeing him again. Therefore, we declare without apology, “Praise God! Hallelujah!”

The family of Allen "Butch" Martin created this Life Tributes page to make it easy to share your memories.

Send flowers to the Martin family.